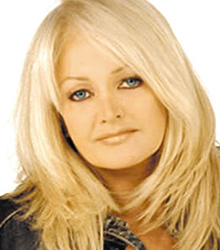 Recognised for her distinctive husky voice and a long list of hit singles including Total Eclipse of the Heart, It’s a Heartache and Holding Out for a Hero, Bonnie Tyler has been a global music star since 1976, when she stormed the charts with the infectious Lost in France.

In her 50-year career, Bonnie has consistently been one of Britain's top-selling female artists performing for audiences in countries across the world and enjoyed critical acclaim for her more recent albums, Rocks and Honey and Between The Earth and the Stars. Her latest album, The Best Is Yet to Come,was released in 2021 and is a contemporary approach to the sounds and styles of 80s pop rock.

Bonnie was born Gaynor Hopkins, in 1951 in the small village of Skewen, outside Swansea, in South Wales. For as long as she can remember music has played a huge part in her life. In fact, her earliest memories are those of her older brothers and sisters rolling up the living room carpet and dancing to the pop hits of the day.

As a teenager, Bonnie was influenced by the biggest female voices of the 60s, especially Tina Turner and Janis Joplin. At 17 she took up a day job in a small local shop, while following her dream at night, singing with a group called Bobby Wayne and the Dixies. After a two year residency with the group she fronted a soul group called 'Imagination'.

Imagination toured the Welsh club circuit extensive, building up a strong following and causing quite a stir. Reports from the time tell that they were close to recording deal standard - but Bonnie was destined for greater things...

In July 1973, Bonnie married Robert Sullivan, who at the time managed a night-club in Swansea - incidentally this was where they met while Bonnie was the resident singer. During this time Bonnie assumed the stage name 'Sherene Davis', in fact Robert called her Sherene for two years after they met!

Robert had represented England in the Olympic Games at judo a year previously and still retains his black belts in judo today. Bonnie often refers to him as her personal bodyguard. Robert accompanies Bonnie everywhere and they have been happily married for over 40 years - undoubtedly one of the longest showbiz marriages in Britain.

On an ordinary night in 1975, Bonnie (aka Sherene!) was doing her normal cabaret routine in ' The Swansea Townsman Club'. Little did she know that there was a talent scout for the song-writing team of the late Ronnie Scott and Steve Wolfe in the audience. He had actually come to listen to the singer performing upstairs, but fate brought him in front of 'Sherene'.

RCA Records launched Bonnie’s recording career two years later with her debut single My! My! Honeycomb. Her breakthrough hit was Lost in France — the single peaked at no. 9 in the UK, and spent six months in the German charts. After enjoying further success with subsequent singles, Bonnie finally broke into the Billboard charts with It’s a Heartache. The rest, as they say, is history...

She is the recipient of an honorary degree from Swansea University,  and she was presented with a Gold Badge from BASCA (now The Ivors Academy) in 2013. She has sold over 20 million records worldwide.

Over and above the timeless tracks that made her a household name, Bonnie has proven her versatility by recording three bilingual number 1 hits. Her 1986 duet Sem Limites Pra Sonhar with Fabio Jr topped the charts in Brazil. Another duet with Sofia Arvaniti, Pethaino Stin Erimia, went to no. 1 in Greece in 1992. Finally, her Platinum-selling re-recording of Total Eclipse of the Heart with Kareen Antonn spent ten weeks at no. 1 in France in 2004.

With five decades behind her, performing across the globe, Bonnie Tyler is continually in-demand to perform at exclusive private parties, corporate events and festivals.

How to book Bonnie Tyler for your event

Katrina (ex Katrina and The Waves)

Katrina (ex Katrina and The Waves)