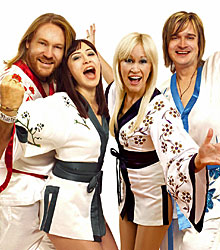 Bjorn Again was created by director and musician Rod Stephen in 1988 in Melbourne, Australia. Scripted and choreographed as a tongue-in-cheek satirical parody of ABBA, the show rapidly achieved cult status. Rod's production company, now based in London, employs top class professional performers having performed over 5,000 shows in 71 countries throughout its three-decade history.

With good wishes from ABBA's blonde vocalist Agnetha Faltskog, the ultimate aim, as always for Rod, is to keep his iconic brand at the top and continue for as long as people want to hear ABBA's songs performed only the way Bjorn Again does them.

Rod had previously been working in metallurgical research when at the age of 29 and inspired by legendary New Zealand band Split Enz's musicianship and theatrics opted for a career change to create a new concept by revisiting the music and fashion of the 1970's.

Rod had originally considered basing a nostalgic show on one of three all time top bands, The Beatles, Queen and ABBA but believing that the latter globally encapsulated all that was good (and maybe some not so good?) about the 1970s, decided ABBA was ideal to focus all his efforts. After countless auditions and months of rehearsals, all Rod needed now was to devise a great show format to accompany the name... and then the Bjorn Again show was ready to rock and roll!!!

Bjorn Again are comprised from a pool of performers from throughout the Northern Hemisphere — all meticulously overseen by Rod — who often plays and sings on stage himself.

Having been acknowledged by Bjorn Ulvaeus as being the show that single-handedly initiated the ABBA revival in the late 1980s and early 1990s, the Bjorn Again show is hailed as the most popular and successful show of its type.

How to book Bjorn Again for your event