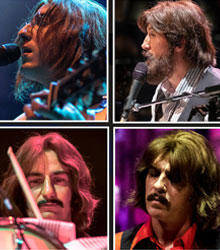 Book The Bootleg Beatles
add to shortlist
About

Formed from the Broadway musical 'Beatlemania' the Bootleg Beatles career began in March 1980 in front of a small gathering of inebriated students at a college function in Tiverton, Devon. Giving themselves 'six months max', work slowly began to dribble in.

More colleges, social clubs, the odd corporate event and then, out of the blue, a 60-date tour of The Soviet Union! Suddenly things were looking a little more permanent. More tours quickly followed. Israel, The Far East, the Middle East, India, then in Feb 1984, America-an invitation to commemorate the Fab Four initial US tour, twenty years earlier. It seemed there was a global market for 'Beatles played live'.

Apart from theatre tours and festivals, the Bootleg Beatles also perform many corporate and private shows.

From product launches and conventions to birthday and anniversary parties, the band are renowned for providing an evening's entertainment for almost any style of event anywhere in the world. These shows are available in a variety of different formats and can range from a basic four-piece one-hour set to a full two-hour theatre extravaganza complete with an eight-piece orchestra.

Most formats also incorporate several costume changes, 'Rock & Roll years' style audio-visual footage, scene setting backdrops and special effect lighting which together put each Beatle period into it's own 'Sixties' context. Thus, the audience, in one breathtaking show is transported from The Liverpool Cavern of 1962, via Sergeant Pepper, to the Apple rooftop in 1969.

The fame of the Beatles is of course international and their music popular with all ages, so what better way to entertain clients of all nationalities young and old than by booking the first and most successful Beatles show in the world - The Bootleg Beatles.

How to book The Bootleg Beatles for your event

Tags for The Bootleg Beatles