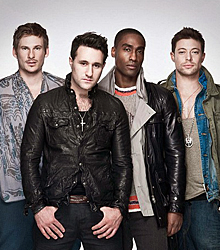 Book Blue
add to shortlist
About

Older, wiser, stronger... More than two decades from the day they came together in 2000 and award-winning band Blue are on top form, possibly at their best.

Accomplished singer songwriters, star performers and still very easy on the eye, the boys have stepped gracefully into manhood with charisma, style, charm and camaraderie. Blue know their game and how to play it well.

Lee Ryan, Antony Costa, Duncan James and Simon Webbe are one of the few boy bands to come out of the 00's who can lay claim to a bond that's as solid now as it was then. They've endured the ups and downs of critical acclaim, flown high at the top of the charts, bared their souls in the tabloids, made the mistakes we've all made and throughout it all their relationship has stayed firm and true.

In 1999, Lee Ryan and Antony Costa met as teenagers when auditioning for a segment on ITV’s This Morning which saw Simon Cowell looking to form the next big British boy band. Ryan was selected for the group but Costa was not, but after the group failed to take off, Ryan and Costa remained friends.

Costa later formed his own group with friend Duncan James and invited Ryan to join them. The trio then held auditions for a fourth member which eventually went to Ryan’s then-flatmate Simon Webbe.

The group landed a recording contract and began working with songwriting teams before the release of their debut single, ‘All Rise’. The song made its way into the Top 10 in the UK charts in 2001. The group’s debut album included more Top 10 singles like ‘Fly By’ and a mix of pop ballads and up-tempo numbers.

With the release of their second album, One Love, in 2002, Blue nabbed themselves the top spot on the UK albums chart. They matched that success with their single, ‘Sorry Seems To Be The Hardest Word’ with Elton John. The high-profile duets continued with the group’s third album as the foursome worked with Steve Wonder on a cover version of his hit single, ‘Signed, Sealed, Delivered’.

Blue are one of the most successful British acts of the Noughties. The band have sold more than 15 million albums worldwide, with all three of the band's previous studio albums - All Rise (2001), One Love (2002) and Guilty (2003) - having reached the #1 slot. Blue have also toured virtually every country in the world.

In 2005, Blue took a well earned break to pursue separate interests, completing solo albums, excursions into musicals, theatrical roles in London's West End, TV careers and the set up of some very successful business ventures. It was a journey of individual discovery and one, which bought all band members a good degree of personal acclaim.

Never far apart and at the request of their fans, Blue reformed for one show in London, with Capital FM in 2009. The taste of performing together and their unified success once again at their heels, Blue went on to represent the UK in 2011 at the Eurovision Song Contest, where they were a favourite of the European voters and thereafter began work on their fourth studio album, Roulette, released in 2013.

Their trademark style is still present, a mix of emotive ballads and energetic tracks for the dance floor, but their new found maturity also makes it's presence known in their smooth performance style and seemingly effortless writing ability to pen songs that just sound oh so good!

Blue are highly popular for live performances at corporate and private events both in the UK and internationally.

Just wanted to say a huge thank you for last night's show... it was great and the audience were so happy, which makes me happy! One of, if not THE best act we've had!

Blue were fantastic! They were a pleasure to deal with and had great banter, on and off stage. Opening with Simon’s solo stuff was a genius start and everyone was thrilled that they sang all their greatest hits; the roof was raised with the crowd joining in! It was a nice touch to spend time with the fans afterwards, chatting and having pictures taken.

Clients often ask about purchasing books for giveaways and delegate packs. Below you’ll find a selection of products by Blue. Click the images to view on Amazon's website. For bulk orders, please speak with your Booking Agent.

How to book Blue for your event