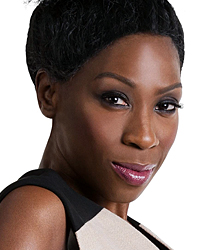 Having sold several million records, won two Brit Awards and the Mercury Music Prize, performed across the globe and recorded a track that became an unofficial national anthem, Heather Small is one of the most successful UK female recording artists of all time.

Heather joined her first group, 'HotHouse' while still in her teens. Although their potential was never fully realised, Heather had a fortuitous meeting with Mike Pickering, a DJ at Manchester's famed Hacienda nightclub.

After hearing Heather's unique voice he persuaded her to collaborate with a group he'd just formed. A group called M People. A group known for hits such as ‘Moving On Up’, ‘One Night In Heaven’ and ‘Search For The Hero’ that would go on to sell over 10 million records worldwide.

Although Heather's statuesque vocals have become synonymous with the sound of M People, they took on a new identity on 'Proud', her debut solo album. The album's standout tracks 'Don't Change A Thing', 'Don't Look For Love' and 'Wherever The Road Goes' - are crafted examples of what soul and gospel should sound like together.

For the Sydney Olympics in 2000, 'Proud' became the 'unofficial Olympic theme!' And in November that same year, Heather teamed up with the legendary Tom Jones on the single 'You Need Love Like I Do'.

In 2003, Heather closed the show at Pride in the Park in July, appeared on Parkinson, Women's Hour and Songs of Praise twice and on the special TV program 'We are the Champions' to celebrate Team England's win at the Rugby World Cup. Heather performed 'Proud' which had been an anthem for the team during the games. She also appeared live worldwide at many events from New Zealand to Dubai.

In 2004, Heather performed at the launch of the Queen Mary II in front of an audience of celebrities and invited dignitaries. There were more appearances on Song of Praise, and a performance at the Gospel Music Awards where she was also delighted to present the lifetime achievement award to the Reverend Bazil Meade of the London Community Gospel Choir.

Heather also performed ‘Proud’ at the Olympic Parade in Trafalgar Square to welcome home the Olympians from Athens. The song was also used to front the successful London Olympic bid for 2012. Heather appeared in a short film to support the bid alongside David Beckham, Amir Khan, Dame Kelly Holmes, Sir Roger Moore, Jeremy Irons and Dame Helen Mirren to name a few.

2005 kicked off with a performance at the Tsumani Relief Concert at the Millenium Stadium, Cardiff. Heather was honoured to be part of the concert, which raised £1.25 million. She performed alongside such artistes as Eric Clapton, Jools Holland, Manic Street Preachers, Snow Patrol, Katherine Jenkins, Lulu, Embrace and Charlotte Church.

In February 2005, M People featuring Heather Small, The Ultimate Collection was released in the UK. It was a collection of the greatest hits of M People and of Heather's solo album. In May of the same year, Heather made her debut theatrical appearance in the Vagina Monologues in London's West End alongside, Rula Lenska, Jenny Éclair and Christine Hamilton.

In the middle of all this she also found the time to perform with Hayley Westenra in Trafalgar Square, to mark the 60th anniversary of VE Day.

... thank you too personally, for helping to make it all possible. Heather Small was a consummate professionals who clearly spends a great deal of time and effort ensuring that her performances are to the very highest standard - Heather’s voice remains one of the greatest, both tonally and in her interpretation, - whilst her performance is still riveting, and her support singers and total blend is of the very highest calibre.

How to book Heather Small for your event