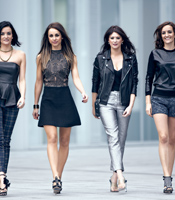 Book BWitched
add to shortlist
About

Drawing inspiration from the success of the Lynch sisters' brother Shane -- a member of Boyzone - the group took to extensive rehearsal and writing sessions before signing with the Glow Worm label, headed by producer Ray Hedges (known for his work with Boyzone as well as Bros).

Heavily hyped even prior to its release, B*Witched's first single, C'Est La Vie, topped the British charts upon its release in late May of 1998; the follow-up, Rollercoaster, also debuted at number one upon its release in mid-September. B*Witched's self-titled debut LP followed a month later, and in the autumn of 1999 the group returned with Awake and Breathe.

In 2012, it was announced that B*Witched would reunite for an ITV2 series entitled The Big Reunion along with five other pop groups of their time - Honeyz, 911, Liberty X, Five and Atomic Kitten (Blue later joined as well). The show featured each group telling stories of their times in their respective bands, before rehearsing together ahead of one major comeback performance at the Hammersmith Apollo.

How to book BWitched for your event