Book The Hoosiers add to shortlist 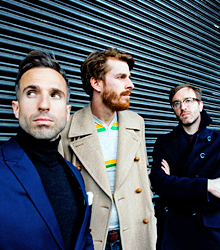 Book The Hoosiers
add to shortlist
About

Taken from their multi-platinum selling debut album, The Hoosiers released their first single, Worried About Ray, in 2007. An instant hit, it reached number 5 in the UK Singles Chart, and their next single, Goodbye Mr. A was another success.

After their second album, Illusion of Safety, the band took a break before smashing back on the scene with The News From Nowhere in 2014 and a UK wide tour.

2015 saw The Hoosiers release their forth album, The Secret Service, as well as two live albums.

To mark their 10 year anniversary The Hoosiers toured the UK playing the number one album The Trick To Life, as they continue to pack out dance floors across the country.

How to book The Hoosiers for your event

Tags for The Hoosiers