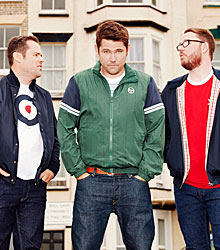 Book Scouting For Girls
add to shortlist
About

Million-selling British pop band Scouting For Girls released their Greatest Hits in 2013, giving the band their fourth Top 10 album. Over the course of the previous 10 years the band sold over two million records, and racked up four Brit Award nominations, an Ivor Novello nomination and four Top 10 singles.

In 2008, Scouting For Girls became the biggest selling new British band of the year. Fronted by the exuberant showman, Roy Stride, they quickly became renowned for their contagious piano-led pop songs She’s So Lovely, Heartbeat, It’s Not About You and Elvis Ain’t Dead. The initial recordings of their second album, Everybody Wants To Be On TV, were ruthlessly scrapped by the band after the Brit Awards 2008, when they decided it needed rewriting.

Whole songs were dropped in Roy Stride’s mission for a collection of perfect pop songs. The resulting album was unshakeably bold, confident, and a genuine step up in sound that loses none of the band’s early charm, but build and expanded upon it as infectiously as only they know how to be.

However, the band have never changed to chase success. Success came to them; their 2007 self-titled debut went on to become triple platinum and they have never looked back.

Hailing from West London, Roy, Pete and Greg have been friends since the age of five, and developed in to one of the best live acts around. Principle songwriter Roy has also had recent cuts for acts such as One Direction, 5 Seconds of Summer, Union J and Seafret, and has become a key songwriter outside of Scouting For Girls.

2015 saw the band release their 4th studio album, ‘Still thinking About You’, which was released in October 2015 and reached a top 15 spot in the UK charts. The album featured the lead single ‘Life’s Too Short’ and Christmas single ‘Christmas In The Air (Tonight)’. 2015 also saw Scouting For Girls complete their 19 date UK headline tour, as well as perform the V Festival main stage and complete a full schedule of summer shows.

In 2019, Scouting for Girls released their fifth album, The Trouble with Boys, featuring the singles Count On Me and Grown Up — the latter of which was co-written with James Blunt. A UK tour to promote the new album was also announced for November and December 2019 including a sold out headline show at the Shepherds Bush Empire. Then, in 2021, they released their sixth album, Easy Cover.

Their 2019 tour was their biggest yet, and a stellar 2020 had been lined up. However 2020 had other ideas with the arrival of Covid-19! And, like many of us, Scouting For Girls initially responded by surrounding themselves with sources of comfort and escapism, things from what felt like a simpler time.

However, going back to the music and culture of their childhoods in the 1980s, the band regrouped during what should have been a summer of festivals, and the result was a joyous album of 80s covers alongside some incredible new tracks, and an optimism that 2021 could be everything that 2020 was not.

‘Easy Cover’ (a pun-tastic title on 80s hero Phil Collins ‘Easy Lover’) was almost titled ‘Scouting For Girls Just Wanna Have Fun’ as it perfectly encapsulated the spirit of both the album and the bands legendary live shows.

Originally intended as a rather sedate acoustic EP the first recordings were discarded as trying a little too hard to be something different, clever or even a bit serious. As front man Roy Stride put the project back on the shelf he reminded himself that Scouting for Girls should never try to be serious or clever!

Over the last few years Scouting For Girls have been kept busy with music festivals, summer shows — including multiple outdoor shows supporting McBusted — and performing for private and corporate clients. They also supported Madness on their UK Arena Tour in December 2014.

Clients often ask about purchasing books for giveaways and delegate packs. Below you’ll find a selection of products by Scouting For Girls. Click the images to view on Amazon's website. For bulk orders, please speak with your Booking Agent.

How to book Scouting For Girls for your event

Tags for Scouting For Girls