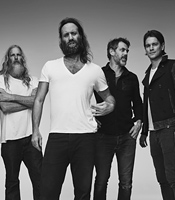 Book Reef
add to shortlist
About

Reef, from England’s West Country in Somerset, astounded even their staunchest fans in 1997 by attaining the number one position on the British charts with their second album, Glow. This feat was foreshadowed by two back-to-back top ten singles, “Place your Hands” and “Come Together,” before the release of Glow. The Los Angeles Daily News included Reef’s Glow on their “Best of ‘97 Music” list.

The band members include Gary Stringer on vocals, Jesse Wood on guitar (since 2014), Jack Bessant on bass and Dominic Greensmith on drums.

Since the arrival of Jesse Wood, Reef are back stronger and better than ever, a live album recorded over 2 sell out nights at St.Ives Guildhall mixing a set of inspired new songs with all the loved classics, a rousing new single for new year, a cover of the Aretha Franklin gospel classic How I Got Over, all with legendary Reef LA based producer George Drakoulias at the controls, simultaneously recapturing and updating the sound of their classic multi million selling No.1 Glow album

Clients often ask about purchasing books for giveaways and delegate packs. Below you’ll find a selection of products by Reef. Click the images to view on Amazon's website. For bulk orders, please speak with your Booking Agent.

How to book Reef for your event