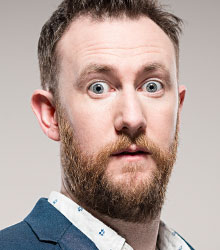 Award winning comedian Alex Horne has established a reputation among critics, comics and audiences as a thoughtful and original stand-up comedian and writer.

Alex is the creator and host of comedy music show The Horne Section on BBC's Radio 4. Together, Alex and his five piece band create a heady mix of stand-up comedy, cabaret performances, outlandish musical talent and special guests. They began as a live show and were quickly commissioned for BBC Radio 4 series Alex Horne Presents: The Horne Section, which has now run for three series. The band has also accompanied Alex as guest host on 8 Out of 10 Cats Does Countdown (Channel 4) and were the only band ever to host Never Mind The Buzzcocks (BBC2).

Alex studied at Sidney Sussex College at Cambridge University during which time he was a member of the Cambridge Footlights, an internationally renowned comedy troupe. This ignited his love of comedy and entertaining audiences and he appeared at the Edinburgh Festival to entertain the masses.

Alex is the host of iTunes chart topping and Chortle Award Nominated podcast Alex Horne Breaks the News (Dave). The show takes a look at the week's big (and small) news topics mixed in with a smattering of statistical analysis, musical numbers and ad hoc features, and is now in its third series.

To date, Alex Horne has taken eight solo shows to the Edinburgh Fringe, and in 2014 his show Monsieur Butterfly was nominated for the “Foster's Best Comedy Award”.He has also released two books based on his critically acclaimed Edinburgh shows; Birdwatching watching in 2009 and Wordwatching in 2010.

Numerous TV appearances include two series as co-host of We Need Answers (BBC4), The Matt Lucas Awards (BBC1),Dara O'Briain's School of Hard Sums (Dave),Dave's One Night Stand (Dave), Celebrity Mastermind(BBC1) and The Games That Time Forgot, a documentary written and presented by Alex for BBC Four.

In addition to Alex Horne Presents: The Horne Section, radio credits include The Unbelievable Truth, Heresy, Wordaholics (BBC Radio 4) and The Guessing Game (BBC Radio Scotland), among many others.

Alex Horne possesses a unique and quirky sense of humour that engages audiences and ensures they're laughing from start to finish; he is an ideal choice of awards host or after dinner comedian at corporate and private events.

Alex Horne’s innovative style and penetrating wit allows him to make every performance unique. Whether it’s hosting a corporate awards dinner, presenting an interactive quiz or providing after dinner comedy entertainment, Alex Horne consistently surprises and delights his audience with his exceptional ability to take the ordinary and make it extraordinary.

THE HORNE LECTURES
For corporate clients Alex Horne can use his comedic skills, combined with the niftiest use of Powerpoint on the circuit, to create a unique, bespoke performance. Renowned for his hilarious lecture-like shows, Alex - assisted ably by the Edinburgh Festival Award winner Tim Key - offers a spoof seminar for every occasion.

With specialist subjects including:
• Body Language - “A beguiling blend of the smart and the stupid, conveyed by a blithely brilliant double act; straight man and straighter man. A real delight.” The Times

• Laughter - “Not in a long time have I seen a comedian break down the barriers with his audience and put faith in them in such a funny and original way.” The Herald

• Birdwatching - “Horne’s wide-eyed appetite for knowlege shines through and uncovers the naturally ridiculous elements of his findings… And who on the Fringe can wield a better PowerPoint presentation?” The List

• Words - “Horne is an engagingly smart man, a sort of Dave Gorman of the intellect. He has created a genuinely smart show. He not only entertains, amuses and impresses, but he makes you want to join in.” The Scotsman

• Science and Golf - “The future of British Comedy.” ShortList

Alex Horne is a very versatile speaker. For an event with a particular theme, he will provide a tailored show, perfectly suited to the evening.
THE COMEDY QUIZ Alex Horne and Tim Key also offer a comedy quiz, complete with computer graphics and sound effects, and purpose built for any occasion.  As quiz masters on BBC4's We Need Answers they perfected the roles of question master and score keeper and can tailor the questions and rounds to people or companies. Alex has written the 2010 end of year quizzes for both The Times and The Observer so is becoming increasingly sought after as a man who can ask good questions.

Quiz rounds will be similar to those of the television show, and may comprise of some, none or all of the following:

• Burning Issues & Fiddly Questions: each contestant answers a question in turn, some of which are based around a general theme relating back to the audience or industry.
• You or Him / Her: contestants answer questions about themselves, or try and score double points by answering questions about their opponent.
• The Physical Challenge: contestants take part in a physical challenge based on a question texted to them by a member of the audience.
• Quick fire Meltdown Round: A timed round of quick fire questions on buzzers, with all the questions scoring double points.  At the end of this round, the contestant with the lowest score loses and must leave the stage wearing the clogs of defeat. The winner gets a certificate.
• Big Money / Personal Prize Showdown: The winner can choose to answer a special question for a (very) small cash prize, or perhaps a personal item brought along by one of their fellow contestants.
Alex is also available with ‘The Horne Section’ - brilliant music combined with interactive comedy, The Horne Section is unlike any other entertainment package.

Alex Horne was a roaring success at last night's PIPA. The audience and our internal team left the event as big fans. He engaged really well with the crowd and was professional and a real pleasure to deal with on the evening.

Alex Horne was absolutely brilliant. He was really perfect for the event and such a nice guy.

Clients often ask about purchasing books for giveaways and delegate packs. Below you’ll find a selection of products by Alex Horne. Click the images to view on Amazon's website. For bulk orders, please speak with your Booking Agent.

How to book Alex Horne for your event