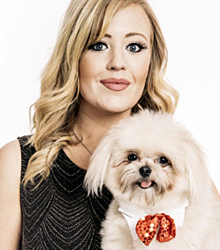 Dancing dog duo Lucy Heath and Trip Hazard stormed through to the live final of Britain's Got Talent in 2016 as the public wild-card vote during the ITV show’s 10th anniversary series.

Professional dog trainer Lucy Heath and her tiny companion Trip Hazard, a two year old crossbreed, received standing ovations from the judges and audiences for all three of their routines.

Lucy's personal dog training passion is heel work to music and she has a huge interest in competitive dog sports. As such she’s won many high profile competitions with her Red Merle Border Collie, Indie. They’ve appeared on television, radio, in magazines and newspapers along with Lucy's four other highly trained dogs; Trent — a Smooth Collie, Ash — Blue Merle Shetland Sheepdog, Foxy — Red and White Border Collie, and of course Trip Hazard.

Aside from media appearances, they’ve performed all over the UK from smaller dog shows at public events and schools, to huge arena shows at Earls Court, London, and the NEC in Birmingham.

All five dogs are great at working with people and other animals, and they know hundreds of different behaviours. Lucy also has two dog-loving, partially trained cats - Jamie, a tabby cat and Littlepuss, a tabby point Siamese.

The tiny dog with a big difference. Trip Hazard and his amazing friends are available to book with trainer Lucy Heath for public engagements, festivals, school shows, corporate functions and ribbon-cutting events with VIP personal appearances. Plus television, film and media opportunities. Speak to one of our experienced agents today to discuss your requirements.

How to book Trip Hazard & Lucy Heath for your event