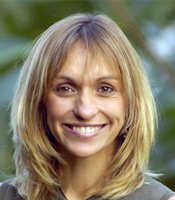 Michaela Strachan is one of Britain’s well known TV presenters. She has been presenting since 1986 on a variety of programmes and taken part in the ITV celebrity diving competition Splash, as well as completing a UK tour with a live theatre show based on her first children's book, Michaela Strachan's Really Wild Adventures.

Michaela is best known for her wildlife programmes The Great Penguin Rescue and the double BAFTA winning Channel Five series Michaela's Wild Challenge. Other major shows for the BBC include Orangutan Diaries, Elephant Diaries and The Really Wild Show and for Channel Five Michaela's Zoo Babies, Michaela's Animal Roadtrip and Animal Rescue Squad. She has also worked for Discovery's Animal Planet presenting Postcards from the Wild and Adopt a Wild Animal as well as many others.

Aside from her wildlife successes, including 10 years as a regular on BBC One's Countryfile, Michaela has presented two series of Great British Ghosts for Yesterday TV and back in the eighties she was the star of the live club culture series The Hit Man and Her as well as presenting the iconic children's TV programme The Wide Awake Club.

Michaela Strachan is much in demand for personal appearances, award ceremonies and presentations. Her natural effervescence and engaging humour endear her to audiences, corporate and educational alike. With her extensive experience of wildlife conservation all around the world and her gift for communication, Michaela is a popular choice to host wildlife festivals and to open natural history, environmental and ecological events and present award ceremonies.

Michaela is an ambassador for Breast Cancer Now and supports many Wildlife Charities including The Animal Asia Foundation, The David Sheldrick Wildlife Trust, The Borneo Orangutan Survival Foundation, Secret World, SANCCOB, Home from Home, World Vision and TEARS, the animal shelter in Cape Town that her lovely dog Rio was adopted from.

Springwatch/ Career Talk
Michaela will be speaking about 'Springwatch Filming' with funny anecdotes and highlights of behind the scenes.

What better way is there to entertain an audience passionate about wildlife and enjoying themselves! Michaela made the marquee come alive with interest and laughter as she talked so eloquently and honestly about her life, connection to wildlife and the wonders of Springwatch

Clients often ask about purchasing books for giveaways and delegate packs. Below you’ll find a selection of products by Michaela Strachan. Click the images to view on Amazon's website. For bulk orders, please speak with your Booking Agent.

How to book Michaela Strachan for your event