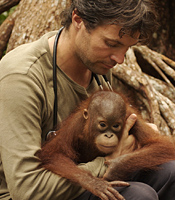 Having first appeared on television when the BBC documented his progression from Vets School to Vets in Practice and Vets in the Wild, Steve Leonard is now firmly established as a popular wildlife presenter and is often described as “TV's best-loved vet"

TV work has made Steve famous as not only one of the country's leading vets, but as an enthusiastic, empathetic and inspirational communicator. His adventures to far-flung places in extreme conditions, alongside his enlightening experiences of animals facing adversity, ensure his presentations inspire and awe his audience.

Steve's series of talks for the Royal Geographical Society have been a national sell-out success. He is patron and speaker for the PDSA, Borneo Orangutan Survival International and the International Fund for Animal Welfare. He is regularly asked to make presentations for zoological societies and universities, as well as for commercial veterinary and wildlife-related companies.

Steve revels in sharing his close encounters with spectacular and exotic species and is much in demand as an entertaining and motivational speaker not only for organisations like the National Geographical Society but also for schools and smaller conservation groups. He is also a fervent supporter and active fundraiser for a number of charities close to his heart, including the PDSA, the UK's largest veterinary charity, Wildlife Vets International, Painted Dog Conservation which helps the survival of African wild dogs and Dog A.I.D. which works with the pets of disabled people.

Steve was a pleasure to work with. He mastered the brief immediately, compared and contributed with great skill, really bringing the event to life

Clients often ask about purchasing books for giveaways and delegate packs. Below you’ll find a selection of products by Steve Leonard. Click the images to view on Amazon's website. For bulk orders, please speak with your Booking Agent.

How to book Steve Leonard for your event