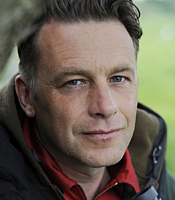 Chris Packham was born in Southampton in 1961 and as soon as he was crawling around suburbia Ladybirds were being desiccated in matchboxes and tadpoles tortured in jam jars. Husbandry skills improved and the menagerie expanded to large collections of reptiles (inside) and birds of prey, foxes, badgers, squirrels etc (generally outside).

A precocious young scientist, swat and nerd in training Chris studied Kestrels, Shrews and Badgers in his teens and undergraduate days at the Zoology department of Southampton University. He also embraced Punk Rock and played in a band and the DIY ethos and determination to never take "no" for an answer are forcefully retained.

Post graduation and a cancelled PhD, (the Badgers were getting a bit much), Chris Packham began taking still photographs and trained as a wildlife film cameraman. The photography continues with exhibitions and invitations to judge prestigious competitions but the camerawork gave way to presenting.

Chris began with the award winning "Really Wild Show" in 1996 and has been working ever since. Credits include, "Wildshots", "Wild Watch", "Go Wild", basically lots of things with "wild" in the title. "X-Creatures", "Postcards from the Wild", "Hands on Nature" and most recently "Nature's Calendar" almost had more inventive programme names. At the turn of the century Chris Packham ran a hugely successful production company "Head over Heels" making programmes for Animal Planet, National Geographic, ITV and the BBC.

He has the honour of being a pro-active president, vice president and patron of some notable conservation charities and regularly expounds his entertaining, pragmatic and enthusiastic, occasionally controversial views, on the environment and its care.

Chris Packham is the new Vice President of the RSPB. He considered this a great honour as the charity is a formidable force in conservation in the UK and globally. Like many he has been a keen and long term supporter. He was awarded a CBE for his conservation work in the 2019 New Year’s Honours.

He has a couple of old cars which don't get much exercise, a couple of dogs who can't get enough exercise, has no fondness for unnecessary exercise himself but reads and writes continuously. He dabbles in the art market and wishes he had a Miro. His top-ten favourite birds has a hundred in the list, he wants to see a Philippines Eagle before he dies and thinks Audrey Hepburn has no known earthly equal. He cannot sing and cannot dance.

Clients often ask about purchasing books for giveaways and delegate packs. Below you’ll find a selection of products by Chris Packham CBE. Click the images to view on Amazon's website. For bulk orders, please speak with your Booking Agent.

How to book Chris Packham CBE for your event