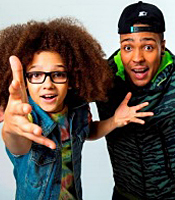 Perri & Jordan are part of the award-winning dance group Diversity, winners of Britain's Got Talent in 2009, and shot to fame in their own right during 2013 when they appeared on Disney's Nickelodeon channel with their own TV show Jordan & Perri's Ultimate Block Party.

Perri Kiely is the youngest original member of the eight-strong Diversity group, joining in 2008. One fateful day when his mum asked him to go shopping, Perri had no idea that saying yes would be the best decision he ever made. While out, he saw Diversity performing and decided from that day on he wanted to dance.

After a year of hard training he finally joined Diversity, wowing the nation with his acrobatics and innovate dance moves. Perri is proud to have a mixed and diverse ancestry, with grandparents from as close as Scotland and Ireland to as far afield as the East African Island of Seychelles. In 2014, Perri won the second series of ITV's Splash!

Jordan Banjo is the younger brother of Diversity creator Ashley. For Jordan, dancing has always been a part of his life. He's been popping and locking with his older brother ever since he was a baby. Now as part of the ground breaking and award winning dance group, Diversity, Jordan gets to entertain the nation, selling out arenas across the country.

Perri & Jordan have a natural bond and their banter is unmistakable. However, not entirely inseparable, they have also embarked on many solo projects, with Jordan starring in the 2016 series of ‘I’m A Celebrity’ and the first ever UK series of ‘The Masked Dancer’ and Perri coming second place on 2019’s ‘Dancing on Ice’ and having stints on shows like ‘Celebs Go Dating’ and ‘The Great Stand Up To Cancer Bake Off’.

Most recently they won a BAFTA, winning in the ‘Must-See Moment’ category for Diversity’s controversial performance on BGT, inspired by the events of 2020.

Also in 2020, they started presenting on KISS FM, hosting the KISS Breakfast show every weekday from 6am, covering all the Best Old Skool & Anthems on KISSTORY, every Sunday from 5pm.

Aside from performing with Diversity, they are available for personal appearances, celebrity DJ sets, award hosting and commercial opportunities.

How to book Perri & Jordan for your event