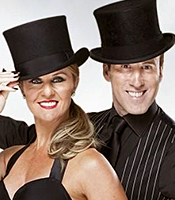 The most recognisable figures in the world of ballroom dance, Anton Du Beke and Erin Boag first made their names in the highly competitive world of international dance competitions as both amateurs and professionals, winning many highly prestigious titles. They were one of the first couples invited to create the hit BBC programme, Strictly Come Dancing in 2004.

As a couple notable appearances include the 2004 Royal Variety Performance, BBC TV's Test the Nation, Celebrity Star Spell, Strictly Dance Fever and Richard and Judy. In 2009 they made a two part show for Sky1 called Ballroom High in which they took teenagers from Eltham South London on an incredible journey culminating in them performing at Blackpool Tower Ballroom. They had the honour to perform at Buckingham Palace for the Not Forgotten Association in 2010.

Their stunning cabaret shows and hosting skills are in constant demand for a wide range of corporate and charity events. have headlined corporate events for clients such as BT, Mercedes-Benz, Coca Cola, Coutts Bank, Virgin Money, LLoyds TSB, Nestlé, P&O, Everyman, The Henrys, EEIBA and Warwickshire Air Ambulance. They can also be booked for select private functions too!
Events are tailored to meet clients' requirements, with options ranging from spectacular cabarets to team-building events and workshops.

If you're planning your next corporate or private event, be sure to book Anton & Erin to add their trademark magic and sparkle to any occasion. They'll be happy to work with you to make your event inspirational, memorable, and truly successful.

Cabaret Show
Slowly slip into a wonderful world of elegance and glamour as the Fred Astaire and Ginger Rogers of the New Millennium take to the floor. After watching their mesmerising performances on Strictly Come Dancing, you can now experience the magical partnership of Anton & Erin live through their spectacular cabaret.

With a stylish selection of stunning ballroom dances, accompanied by breathtaking costume changes and glorious music, Anton & Erin deliver one of the most entertaining shows around. Enjoy an additional sprinkling of humour as Anton charms the audience in between dances with his famously smooth persona and you are certain to remain enthralled from start to finish — simply sit back and enjoy the show!

The cabaret is suitable for both private parties and corporate events and Anton & Erin will go out of their way to meet any special requirements you may have. Cabarets can also include audience participation and team-building exercises to give all participants a chance to display their new skills in a fun and relaxed environment.

Personal Appearances
From red carpets to ribbon cutting, product launches to guest judging, add a unique touch to your next event, function or party with a personal appearance by Anton & Erin. There will be plenty of opportunities for autograph signing and taking photographs, as well as Anton & Erin meeting, mingling with, and entertaining your guests.

Put a buzz into your next celebrity event or charity auction: Anton & Erin are the epitome of refinement, glamour, style and talent and will bring an individual spin and unique PR opportunity to your event.

After Dinner Speaking
Are you looking to add glitz, glamour and sparkle to your upcoming event? As highly accomplished dancers with internationally renowned careers, Anton & Erin have found themselves in great demand as after-dinner and motivational speakers. They engage audiences with insights into their life, both on and off the dance floor and with their witty forthright views and irresistible charm they quickly build rapport, generate laughter, and add polish, panache and positivity to any function.

How to book Anton & Erin for your event