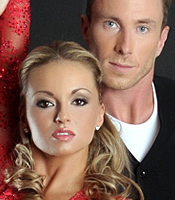 James and Ola Jordan are the all-star dancing couple who have shot to fame from their incredible dancing on BBC1's prime-time hit show, "Strictly Come Dancing".

The pair first started dancing in 2000 and turned professional together in 2003. The pair joined the hugely sucessful "Strictly Come Dancing" in 2006 during the show's fourth series. They have appeared in every series since until James' departure after the 2013 series.

James & Ola Jordan are an accomplished dance act and married couple who perform as entertainers at corporate functions and after dinner speaker events, as well as providing private tuition, seminars and lessons in their own specialist dance act: Latin American dance, specifically the rumba. Their success on Strictly have made them one of the most sought after music acts currently working the after dinner speaker circuit.

James & Ola began their partnership as an amateur dance act, recognition and praise quickly guided them into the professional world of music acts; they began appearing as entertainers across the globe and were an incredibly popular music act in Japan and Hong Kong.

They are ranked in the top 20 dance acts in the world.

Imagine the amazing dancing couple James and Ola Jordan performing live at your special event; entertaining you and your guests with the Cha Cha, Rumba, Samba, Jive or Paso Doble, as seen on BBC1's Strictly Come Dancing.

The performance can be tailored to your requirements - you can book them for either their dance showcase; where Ola will make a number of costume changes between their dance routines whilst James interacts with you and your guests in a question and answer session. Or perhaps a dance Masterclass for you and your guests, whichever you choose, a truly fantastic evening will be had by all.

Alternatively James & Ola can arrange corporate team building workshops to enable you to get together with your work colleagues, and learn how to dance the Rumba or Cha Cha Cha, with a mini competition at the end.

And, in addition to the above James and Ola are also available for:
• Adjudication
• Personal Appearances
• Presenting
• Modelling

We were fortunate to have Ola and James Jordan perform at the Rainbow Valley Ball 2018 in Glasgow and they were absolutely magnificent.  From the moment they appeared on the dance floor they had all 500 guests totally mesmerised.  Each dance was incredibly entertaining and even while Ola nipped off to change, James kept everyone enthralled with Q and A and plenty of humour which at one point involved a dance off with a member of the audience.  Their final dance to Proud Mary had the whole room jumping.  An energetic and engaging performance and absolutely lovely couple to work with - James and Ola will take your event to a whole new level. We'd have them back in a minute.

Clients often ask about purchasing books for giveaways and delegate packs. Below you’ll find a selection of products by James & Ola Jordan. Click the images to view on Amazon's website. For bulk orders, please speak with your Booking Agent.

How to book James & Ola Jordan for your event