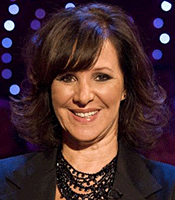 Arlene Phillips is a world-renowned choreographer with her work seen in widely in theatre, feature films, concert arenas, television, music videos and commercials.

Arlene first came to the attention of the British public when she created the dance group Hot Gossip. Her choreography has been seen in theatre, feature films, concert arenas, television, music videos and commercials. Arlene appeared as a judge on Strictly Come Dancing (2004 - 2008), Strictly Dance Fever and she collaborated with Bruno Tonioli to create DanceX and Dance War. She recently created a new musical drama Britannia High for ITV and appeared on Sky TV's Grease The School Musical.

Television Credits- include The Kenny Everett Video Show featuring dance group Hot Gossip with Sarah Brightman, Peak Practice, Dame Kiri Te Kanawa & Friends, Lesley Garrett - A Night At The Opera and An Evening With Michael Ball, The Brit Awards, The Royal Variety Show, The Prince's Trust, Children in Need, Party in the Park and the legendary Party at the Palace.

Clients often ask about purchasing books for giveaways and delegate packs. Below you’ll find a selection of products by Arlene Phillips. Click the images to view on Amazon's website. For bulk orders, please speak with your Booking Agent.

How to book Arlene Phillips for your event