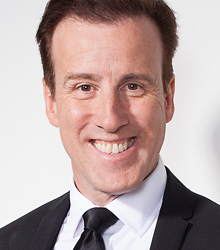 Witty, charismatic and a natural entertainer, Anton's skills in front of an audience extend far beyond his exceptional ballroom talents. That's not to underestimate the national and international dance achievements which he and his professional partner, Erin Boag have collected over the two decades they have worked together.

Born Anthony Paul Beke in Sevenoaks, Kent, Anton began dancing at 14, when he discovered his local dance school, The Holton School of Dancing in Sevenoaks. He took his first dancing exam in June 1978. He left school at 16 to follow an amateur dancing career. At 17 he decided to specialise in ballroom, however he has also trained in ballet, contemporary, jazz and modern theatre dance.

Anton Du Beke is now a well known presenter of popular daytime BBC Two series Step up to the Plate and BBC One's Hole in the Wall. He has also made many guest appearances on the BBC in Celebrity Star Spell, City Hospital, King of the Waltzes, Test The Nation, Celebrity The Weakest Link, Question of Sport Christmas Special, Graham Norton's Big Finish, Who Wants to be a Millionaire Christmas Celebrity Special, Rob Brydon's ‘Annually Retentive', Victoria Wood's ‘Christmas Special 2009' and ITV1's Loose Women and GMTV.

In 2007, he competed in the BBC Two series Underdogs and was a featured coach and choreographer for Let Me Entertain You. Anton teamed up with Lesley Garrett once again in 2004, for a gala concert in Leeds, broadcast on BBC Two. In 2006, he choreographed and took part in BBC One's live Dancing in the Streets.

As celebrity host for ARMA's inaugural Awards ceremony, Anton Du Beke added professionalism, charisma and fun to the evening. A popular choice as host and an excellent presenter.

Association of Research Managers and Administrators.

When can Anton come again? All of my friends are jealous and wished they had come along!

Clients often ask about purchasing books for giveaways and delegate packs. Below you’ll find a selection of products by Anton Du Beke. Click the images to view on Amazon's website. For bulk orders, please speak with your Booking Agent.

How to book Anton Du Beke for your event