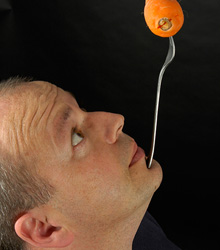 Steve Rawlings is a truly unique performer who has broken down the barriers between stand up comedy and physical theatre. He has created a wonderfully entertaining blend of comedy, character, and technical ability that keeps an audience on the edge of their seats.

Steve's performance is packed full of original and unique routines such as juggling with a table and vase of flowers (he is the only person in the world to do this), setting fire to his head, juggling ping pong balls with his mouth, and balancing a tray of bottles and glasses while juggling blazing fire torches simultaneously - then ending with the astonishing spectacle of furniture juggling with a chair!

This unique blend of unabridged skill, overlaid with a level of stand up comedy that any comedian would be proud to present, appeals to an incredibly wide range of audiences; from performing to the armed forces in war zones, to families, heads of state, royalty and corporate dinners, all with equal success!

Steve Rawlings' career was launched when he appeared as special guest star in the West End production of Sugar Babies alongside Mickey Rooney and Ann Miller. He was then invited to appear in The Royal Variety Performance in the presence of Her Majesty The Queen.

Since then Steve has appeared on over 100 television shows worldwide. He has performed at St James' Palace in honour of fallen service men and woman, and been specially requested to perform at the Summit of the Americas — attended by 32 heads of state including former US President Barack Obama.

Most recently Steve's talents have been much in demand with modern circus. This began when Rolf Knie asked him to appear in the opening season of his new sexy circus 'Oh La La'. This was followed by appearing with circus Flic Flac in Dortmund, and Kassel.

Steve has appeared alongside leading names in British comedy such as Lee Evans, Eddie Izzard and Al Murray. Television appearances include The Paul O'Grady Show, The Jack Dee Show, Live at the Empire, Xchange, Saturday Night Live, You Bet, How Do They Do That, The Big Stage and Live at Jongleurs.

Steve Rawlings is a first class performer with an excellent track record guaranteed to make any occasion a hit.

Performing at corporate events, private parties and festivals take up a large part of Steve Rawlings’ year as his act appeals to a much broader audience than most other performers, and he can perform fluently in German, Spanish and French.

Steve has worked for most of the world's biggest companies including Glaxo, Ford, Avis, Shell, BMW, Hilton International and many more.

He can tailor the act to suit any size of stage or venue, even including venues with low ceilings, and can perform from anywhere between 5 minutes to 1 hour, but typically around 25-30 minutes as standard.

Hilarious and original, Steve Rawlings' mixture of desperation and downbeat humour steals the show. His balancing a tray of bottles and glasses on his chin, while giving a running commentary on his difficulties is a classic piece of comic business. This is knife-edge humour which involves the audience in sympathy for a man flogging himself to death for a laugh, and yet knowing that he is perfectly capable of performing the complicated and daring routines he has set up!

A brisk, skilful act that will get your heart in your throat and give you more belly laughs than any comic, and that’s a rare treat!

How to book Steve Rawlings for your event