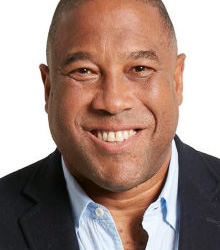 John Barnes was born in Jamaica in 1963, however it was in England that he secured a reputation as one of the most exciting and gifted footballers of the 1980s and 90s; amassing nearly 600 league appearances during a playing career which included Watford, Liverpool, Newcastle and Charlton, before finally hanging the boots up in 1999.

John started his professional career with Watford in 1981 and over the next six seasons helped the club win promotion from the old second division, as well as reaching the 1984 FA Cup Final. His brilliant solo goal against Brazil in the Maracana Stadium in 1984 truly marked his arrival at international level.

Signed by Anfield boss Kenny Dalglish for £900,000, he spent ten years on Merseyside and quickly became a firm fans’ favourite with his power and eye for a goal. John’s dazzling and intuitive play made him a firm favourite with the Kop and in 1993/1994 he was installed as Liverpool club captain.

Under the management of Graeme Souness and Roy Evans, John moved from playing on the wing to central midfield where his vision and passing ability established him at the centre of Liverpool's exciting young team.

As captain John lifted the 1995 Coca-Cola Cup, beating Bolton Wanderers 2-1 before losing to Manchester United in the 1996 FA Cup final. Making over 400 appearances for the club in all competitions, Barnes won two First Division titles, two FA Cups and the League Cup with Liverpool.

He then moved from Liverpool in 1997 to join former team mate and manager Kenny Dalglish at Newcastle United before joining Charlton Athletic.

In the summer of 1999, John Barnes joined Scottish giants Celtic as Head Coach, where he laid the foundations for the club's future success including buying Swedish international Henrik Larsson and overseeing the redevelopment of the side.

Throughout his playing career, John Barnes, like other black players of his era, was frequently the target of racial abuse from the terraces. During one of his first appearances at Anfield, John recalls that the tea lady had, intentionally or unintentionally, served tea to all the players in the lounge except him, and he made a joke about it by asking light-heartedly, "Is it because I'm black?"

As well as being abused by opposition players, on occasions he reported overhearing team mates making racist remark towards other Black players in opposition teams. One instance of racial abuse by a section of Everton supporters in the Merseyside derby at Anfield led to Everton chairman Philip Carter disowning the offending supporters, branding them "scum".

The highest profile racial incident of his career was captured in a photograph where John Barnes, in full Liverpool kit and mid-match, casually back-heeled away a banana which had been hurled at him during a match with Everton at Goodison Park.

In February 2019, John Barnes was a guest on the BBC’s political debate programme, Question Time, commenting on racism and discrimination in society.

John’s amiable and relaxed manner, especially in the face of long-term injuries, has won many friends off the field. His appearance as a guest captain on BBC TV's Question of Sport programme was particularly popular and paved the way for a budding broadcast career, spearheaded by regular appearances on ITV as a studio guest and match analyst.

John later joined Channel 5 as the channel's principle football presenter and regularly brings his insightful knowledge and understanding of football to television screens.

More recently, John has taken part in Strictly Come Dancing, Waterloo Road and is currently a pundit on ESPN and Supersports where he provides coverage of the Champions League. He has worked with a number of brands including Mars Bar, Lucozade, Standard Chartered, Hyundai, Vauxhall, Western Union and Sports Direct.

Besides working in television and with corporate clients, he is also involved in education projects to promote the anti-racist message and is an ambassador for the charity Save the Children.

John Barnes is an exceptional and sought-after speaker, he has built a strong profile as an inspiring and motivating keynote speaker where his genuine warmth and experiences, on and off the field, are always well received.

We really liked John Barnes’ insight into what it was like being a black footballer at a time when there was a lot more racism directed towards them and his views on how race and class are tied together. He has a huge amount of knowledge from the eight years he spent researching for his book about this subject. I’d strongly recommend him as a speaker for this reason.

Clients often ask about purchasing books for giveaways and delegate packs. Below you’ll find a selection of products by John Barnes MBE. Click the images to view on Amazon's website. For bulk orders, please speak with your Booking Agent.

How to book John Barnes MBE for your event