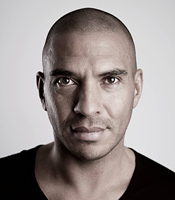 Stan Collymore is known for his searingly honest and expert opinions about the beautiful game.

He started his professional career at Crystal Palace in their version of the class of 92 including England Manager Gareth Southgate, Alan Pardew, Mark Bright, Ian Wright and more. He then moved on to Southend where he helped keep the club in Division One. In 1993 he signed for Nottingham Forest and was part of the team who took them back into the top flight before finishing 3rd in the Premier League the following season.

He held the English transfer record when he moved from Nottingham Forest to Liverpool for £8.5m in 1995. There he established one of Europe’s great strike partnerships with Robbie Fowler and scored THE winner in THAT game against Newcastle United – in 2003 it was voted the greatest sporting moment in Sky Sports’ first ten years.

He played for his boyhood idols Aston Villa and proudly wore the 3 Lions of England.

Since retiring from football he has built a career in the media working for broadcasters in the UK and internationally. He also writes weekly columns for The Mirror newspaper. During 8 successful years at TalkSPORT, his award winning Call Collymore show built up a loyal following, which led him to launch his own broadcast platform and app in 2016, which give a voice to the fans and champion their views.

Stan is an ardent campaigner for awareness around mental health issues and created friendsinneed.co.uk to provide a community for those who are struggling or feeling alone.

Clients often ask about purchasing books for giveaways and delegate packs. Below you’ll find a selection of products by Stan Collymore. Click the images to view on Amazon's website. For bulk orders, please speak with your Booking Agent.

How to book Stan Collymore for your event