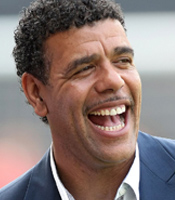 With his trademark enthusiasm and idiosyncratic turn of phrase, delivered from various wind-swept gangplanks from up and down the country, Chris Kamara has firmly cemented his place in the nation's affections.

Born in Middlesbrough, Chris Kamara is a retired English footballer and manager, affectionately known as Kammy, he played as defender/midfielder during his career which lasted for twenty years.

Chris joined the Royal Navy as a young lad and played in their football team. During a match against the Portsmouth youth team his talent was spotted and he was subsequently signed by the club. The rest, as they say, is history!

Chris Kamara, the former 'hard man' defender and midfielder, made 11 team moves during his long career as a player, including being part of the 1992 Championship winning Leeds United team managed by the legendary Howard Wilkinson.

He finished his playing career at Bradford City and it was with the Bantams that Chris Kamara began his short career as a manager. It was during his two-years in management with them that the team was promoted into the First Division, in season 1995-96. It was also Chris who put together most of the team that won Bradford promotion into the Premiership.

In more recent times, Chris Kamara has worked as a football pundit and commentator and his fun loving approach to life has earned him many fans. He has endeared himself to the public with his light-hearted approach. Chris became known for his unusual and often comedic personality, which he established whilst working as a football speaker for Sky Sports.

Chris would use bizarre and, as-of-then unheard of phrases, to describe players, tactics and behaviour and also became synonymous with viewers for his gaffs and mistakes, famously missing vital points during games including yellow cards and send offs.

Chris has also featured in the successful Ladbroke's advertising campaign and is a regular columnist for The Sun. As well as being an Ambassador for Marie Curie, Chris became an Ambassador of the Special Olympics Great Britain and was also one of the runners of the 2012 Olympic torch in Doncaster.

Chris Kamara is a very funny and in-demand after dinner football speaker with a unique take on events in the media and sports world. Chris’s charisma and sense of humour is infectious; he’s known in the industry as a guy who works exceedingly hard and is always ready with a winning smile.

Kammy was loved by one and all on the show and a total joy to be around. He turned up every day with bags of energy, professionalism and focus and boy, did that show on camera!

Clients often ask about purchasing books for giveaways and delegate packs. Below you’ll find a selection of products by Chris Kamara. Click the images to view on Amazon's website. For bulk orders, please speak with your Booking Agent.

How to book Chris Kamara for your event