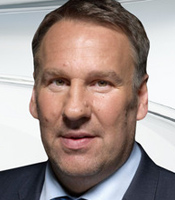 Premier league footballer and manager Paul Merson is now best known as a match reporter for Sky Sports and a pundit on Soccer Saturday. Merson is often the target of good-humoured jabs from Jeff Stelling and other members of the Soccer Saturday panel, such as his attempts to pronounce the names of foreign players.

As a player, Paul Merson notably played in the Premier League for Arsenal, Aston Villa and Middlesbrough, he also earned 21 caps for England, scoring 3 times for his country. Merson still plays for the England Legends, a 16-man team of former internationals.

Paul Merson was a fantastic speaker at our summer party this year. I would strongly recommend him to anyone who is looking for a insightful humorous talk.

Clients often ask about purchasing books for giveaways and delegate packs. Below you’ll find a selection of products by Paul Merson. Click the images to view on Amazon's website. For bulk orders, please speak with your Booking Agent.

How to book Paul Merson for your event