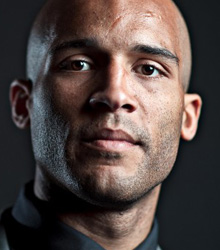 Clarke Carlisle is a radio and television presenter and former professional footballer. He has authored two documentaries, Football’s Suicide Secret and the critically acclaimed documentary “Is Football Racist?” for the BBC and wrote a book about his career A Footballer’s Life.

Clarke Carlisle retired at the end of the 2012-2013 season after making over 500 appearances at senior level.

Clarke has experienced the very highs of professional sport. He has won promotion with both Blackpool and Burnley, represented his country and has played at the home of English football Wembley Stadium. However, in 2001 Clarke suffered a posterior cruciate ligament injury which sidelined him for a year, nearly ending his career.

Clarke Carlisle is an ambassador for the mental health charity Mind and the Premier League Kick It Out Campaign which promotes inclusion and equality in football.

He is an excellent, highly sought-after, motivational keynote speaker and event host and a candid, inspiring speaker in the area of mental health and workplace well-being.

Clarke Carlisle is open about his struggles with alcohol, depression and gambling – the strains of a multi-billion pound industry in which both fans and club believe they own you.

He’s similarly candid about racism and the Kick It Out campaign. Clarke talks about diversity and culture change in a game traditionally associated with macho behaviour.

Suffering from depression and mental health issues throughout his adult life, Clarke speaks openly about his battle, working to break down the stigma around these issues.

Keynote Speaking
Whether it’s part of a wider conference, internal event or just a one-off session, Clarke Carlisle’s keynote presentations are always insightful, impactful and provoke further conversation within your workplace or community.

Following sign-off of the booking and after a briefing call with you, every speech is tailored to meet your specific needs and requirements and the focal point is adjusted according to the relevant factors specific to your aims and objectives.

Following the presentation, Clarke actively encourages Q&A with the audience and this can cover any format that best suits your needs and the setting of the presentation.

Clients often ask about purchasing books for giveaways and delegate packs. Below you’ll find a selection of products by Clarke Carlisle. Click the images to view on Amazon's website. For bulk orders, please speak with your Booking Agent.

How to book Clarke Carlisle for your event