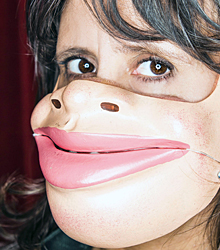 Ventriloquist Nina Conti is the daughter of well-known British actor Tom Conti.Nina always had dreams of following in her father's footsteps and becoming an actress, however she started doing stand-up ventriloquism in 2002 and quickly shot to fame by winning the BBC New Comedy Award that same year.

Famed for her foul-mouthed ‘sidekick' Monkey (Monk), Nina has won numerous comedy awards for her writing, acting and ventriloquism.

Nina took her first solo full length show, Complete and Utter Conti to Edinburgh in 2007, which went on to win the prestigious BARRY Award in 2008 at the Melbourne Comedy Festival. The following year, Nina took a new show, Evolution, to the 2008 Edinburgh Festival, which proved to be a massive sell out. Nina's 2010 show, Talk to the Hand, which introduced brand new puppets, was a hit show for the full run of the Edinburgh Fringe that year.

Nina Conti's radio work includes four series of Claire in the Community, the BBC Radio 4 Sony-Award winning series, which she featured in from 2005 to 2009. Most recently, Nina starred in Sneekiepeeks, Harry Venning's and Neil Brand's 2010 BBC Radio 4 Comedy about a team of inept, backstabbing surveillance operatives.

More recently Nina has fronted two documentaries for BBC 4, A Ventriloquists Story: Her Masters Voice, saw her taking the bereaved puppets of her mentor and erstwhile lover Ken Campbell on a pilgrimage to Vent Haven. For the second, Make Me Happy: A Monkey's Search for Happiness, Nina took Monk on a journey into the world of new age and alternative therapies.

Nina Conti is an experienced corporate act and highly sought-after. She has performed after-dinner cabaret with Monk (and sometimes her other puppets) for clients as varied as Nokia, Caspian Publishing, AAH Pharmaceuticals, Jardine Lloyd Thompson, Incisive Media, the DRP group, and Euromoney, not to mention countless individuals' private parties.

Nina's sophisticated intelligence and playful style suits a wide range of corporate audiences, and Monk can be as clean or as rude as each client wishes!

I wanted to thank you for helping me with booking Nina Conti for our event last week, and to ask you to pass on our thanks to Nina for coming to do it. I had fairly high expectations, having been a fan of Nina for a long time, but I confess my expectations were surpassed. She was just brilliant. Not only was she just genius funny on stage, but she was also really lovely to work with and a huge pleasure to have around. The feedback has been universally and unashamedly positive, and she has helped to deliver what I think was our most successful meeting ever.

Nina Conti was exceptional. We were actually quite shocked, but that made it all the more hilarious!

Nina Conti was outstanding. The audience were totally captivated by her and the feedback has been fantastic from all concerned. From our side she was a delight to work with and please pass on our sincere thanks for her contribution to the evening.

Nina Conti was amazing and totally made the evening. In all the thank you letters that I have received everyone but everyone has said how fantastic she was. In fact a couple of people have rung up for details so hopefully she will get more dates for her diary…She was also so patient, as she didn't get to go on until [late] but she did not complain once. Please thank her a million times over for making our evening such a huge success.

Clients often ask about purchasing books for giveaways and delegate packs. Below you’ll find a selection of products by Nina Conti. Click the images to view on Amazon's website. For bulk orders, please speak with your Booking Agent.

How to book Nina Conti for your event