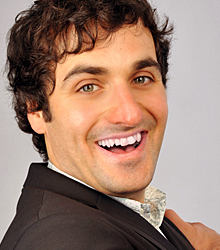 Patrick Monahan started off on the glamorous 'Irish/Iranian/Geordie' stand-up circuit where he developed his chatty & friendly, story telling style.

Patrick Monahan regularly performs in most comedy clubs across England from Newcastle to Devon, as well as in Scotland, Ireland, Wales & Jersey. He has also done a host of University network shows for Avalon, Paramount and Off The Kerb Events

As well as a regular TV & studio warm up - on shows such as 'Friday Night Jonathan Ross', 'The IT Crowd', 'The Lenny Henry Show', 'Davina', 'Open House with Gloria Huniford', as well as a regular MC at selected venues on the comedy circuit.

He's also appeared as a contributor to nine out of twelve episodes of Channel Five's 'That's so Last Week'. He has also appeared on BBC's Destination Unknown', 'Malai Monologues' and as a panel member on the comedy quiz show 'Sudoko Street Challenge'.

Just wanted to say thanks for sorting everything with Patrick Monahan last night. We thought he was hilarious, and so did all our guests.

This gifted livewire commands the stage with a mix of wit and force of personality”.

Clients often ask about purchasing books for giveaways and delegate packs. Below you’ll find a selection of products by Patrick Monahan. Click the images to view on Amazon's website. For bulk orders, please speak with your Booking Agent.

How to book Patrick Monahan for your event