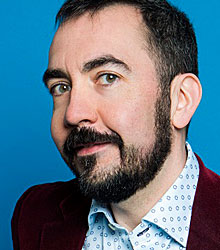 Stephen Carlin has earned critical acclaim, accolades and a growing fan-base with his original and insightful writing style and accomplished delivery. He is a very enigmatic act, using a unique pattern of delivery to amuse the audience with very unexpected and off the wall references.

From his sartorial elegance to his in-depth and hilarious knowledge of International snooker, Stephen Carlin's performance takes the audience into the mind of a passionate obsessive. This man is well on his way to become Scotland's newest addition to its history of brilliant comedians.

Stephen Carlin was born in Scotland in 1976. He frequently claims to have made his stage debut in a school nativity play aged five. This is almost certainly untrue. It is far more likely that he made his stage debut the previous year performing magic tricks at his nursery school. No recording of that show now exists but eye witnesses recall a mesmerising turn. Carlin, sensing that the tide was turning against variety got out while he could. He was to take no further part in the 1980s, and had yet to embrace the alternative comedy revolution. He was four years old and an idiot.

Aged ten, Stephen briefly co-produced an independent magazine with some of his school friends entitled Transamag. The magazine folded after one issue amidst bitter recrimination. This experience was to prove invaluable in dealing with the frequent clashes of egos he would encounter while working in the media.

1993 and now aged 17, Stephen Carlin recorded a mockumentary Cabbie about fictional taxi drive Ken McGafee. To achieve a realistic recording as possible, Stephen had learned to drive specifically so it could be recorded while he was driving. Off the back of this he sometimes claims in interviews to have invented the mockumentary format. In fact Spinal Tap had hit the big screen nine years earlier. However Stephen was one of the first people to wrongly claim he'd invented the mockumentary. So he is a pioneer.

Whilst a student at Aberdeen University he submitted scripts to the Student Show. Carlin's Monty Python writing bias at the time conflicted sharply with the rest of the writers Are you Being Served writing bias. None of his material was used but despite this fact he was awarded a writing credit in the programme.

In 2001, Stephen moved to London to ‘do something' with his life. He wasn't sure what that something was. At first he thought ‘something' may comprise of spending all his time with a guy called Dave drinking in The Black Lion in Plaistow, East London. However after persevering for a year it did not prove artistically fruitful.

In 2002, after attending a gig at London's Chuckle Club, Carlin finally took the plunge and started performing stand up comedy. His first gig was at the Camden Head pub in Islington. Stephen now performs all over the country, he also writes a lot of comedy. He is particularly proud of his recent BBC radio series Gus Murdoch's Sacred Cows.

Stephen Carlin lives in London. His hobbies include drinking whisky and refusing to ask directions even when lost.

Chosen as one of Stewart Lee’s “Ten Best Stand Up Comedians Ever”, Stephen Carlin has supported Stewart Lee, Stephen Merchant & Tom Stade on their national tours.

Carlin’s art lies in his ability to quarry wildly original material from the most conventional of starting points. By taking run-of-the-mill observations and then applying his relentless but warped logic. This, married to his exceptional use of language and his brilliantly opinionated broadsides, make for memorable routines. All skilfully delivered in his deadpan Scottish brogue.

Stewart Lee is one of the funniest men on the planet, and it was no surprise to see him prove it for the umpteenth time on Tuesday night. What did come as a shock, however, was to see his support act – the hitherto unknown Scot Stephen Carlin – come within a cat's whisker of upstaging him.

Ready to become at the very least a cult favourite among fans of the sharper end of stand-up.

How to book Stephen Carlin for your event