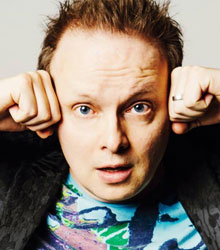 Stephen Grant is one of the UK’s hardest working and most respected stand up comedians. Whether entertaining stag and hen parties, voicing animations, warming up TV audiences, presenting radio shows or hosting corporate award nights, Stephen never fails to pull in the laughs.

He is a multi-award winning MC and the resident compere at Krater Comedy Club in Brighton. He performs at clubs and corporate events all over the UK and on the international circuit; he has taken six critically acclaimed shows to the Edinburgh Fringe Festival.

At age 13, Stephen released his first ever computer game Dieste, written on the ZX Spectrum. It was an adventure game set in the future. His second game, Blowtorch Baby Bloodbath, showed a perverse sense of humour that could well have been an indication of things to come. By the age of 16, Stephen had written 5 full size commercial programs and was contributing to national computer magazines.

No serious performing followed until aged 17 and whilst doing his A-levels, Stephen linked up with his next door neighbour called Robin Driscoll, who was making a small living as the writer on Alas Smith & Jones. Robin encouraged Stephen to take his written ideas back to the stage, and with the help of a friend, put on a half hour show called 'Pythonesque', with original sketches written in the style of the Monty Python team.

An isolated one-off success, Stephen was to not perform live again after this for another 6 years. In that time, Robin came up with an idea for a character called Mr Bean and moved out and up on the enormous success that followed. During that period, Stephen developed his professional career as a programmer and software designer, before his more interpersonal talents pushed him into the world of consultancy and project management.

In late 1996, aged 23, the desire to go back to a stage started to kick in, and Stephen made a new years resolution in 1997 to try to get up on the stage and attempt to perform stand up comedy. In February 1997 at the Good Companions pub in Brighton, Stephen made his debut solo appearance on stage to an audience of 40, half of which were friends who had been subjected to 'living room auditions' over the previous 6 weeks.

Despite the overriding feeling of nausea throughout (for the performer, not the crowd), it went surprisingly well. This encouraged him to go back. And back. And back. Playing only the one venue, Stephen wrote ten minutes new material every week, and a lot of this is still in his set today.

In 1998 he made his Edinburgh debut to sell out audiences at the Pleasance theatre, where he was the main subject of the 6 part TV series Edinburgh or Bust. In 2003 he returned with "Route 1", which achieved critical acclaim as one of the few five star reviews awarded that festival.

A large proportion of Stephen's work in TV and radio. He was the main comedy writer for Radio 1's daytime programming from 1999 to 2003 and has written for everyone there from Zoe Ball to John Peel. Additionally, Stephen took on the mantle of writing BBC1 Saturday flagship show Live & Kicking in early 2001. On TV he has written and presented the BBC2 peak time documentaries "Stephen Grant's Journey to the Wasteland". "The 29 Steps" and "The Estate We're In". More recently his programs "The Brighton Festival" and "Noise" were broadcast on BBC1.

As a writer, Stephen Grant is a columnist for Sussex Life, Live For Now and the very popular car industry website Sniff Petrol. Additionally, he's the occasional TV reviewer for the Sunday Mirror. He also does the TV warm up for many leading network comedy shows.

Stephen Grant’s speed and dynamism create a magical energy which has audiences rapt and hanging onto his every word. It is this that led him to write for Rob Beckett on Mock the Week and for Russell Kane on Live at the Electric as well as Lee Nelson’s Well Good Show for Avalon TV and Seann Walsh for Channel 4’s Stand Up For The Week.

Whether you’re looking for a professional and established comedian to entertain at your company’s party, a presenter for your corporate training videos or an MC to host your industry awards dinner, Stephen Grant is one of the best and busiest on the circuit.

With a wealth of experience in the corporate entertainment sector Stephen can create a bespoke show to suit your specific requirements. Always a consummate professional, he will ensure your employees, colleagues and/or clients have an outstanding night to remember.

Stephen possesses an energy and intellect which, combined with his eight years in the corporate world, make for a perfect experienced host and entertainer for any event.

Clients often return to Stephen for repeat engagements due to his ability to vary his content and material, often tailoring it specific to the client’s requirements and industry.

Just wanted to say what a fab job you did on this. I really appreciated the advice on the various comedians and the quick turnarounds, and it was great to be spared the bulls**t I often get from people I work on events with. It was a pleasure working with you on this one and I hope you'll send this email off to whoever is responsible for pay rises! Stephen Grant was great and the audience loved him - I'm now going to have to go to one of his shows and see his real stuff! If you could pass on to him that everyone loved his stuff that would be great as I didn't get a chance to speak to him after his set.

Stephen Grant was fantastic on Thursday; perfect for what our client was looking for. He created an instant rapport with the crowd and was quick, witty and charming both on stage and off. The guests loved him and everyone involved was thrilled with his performance. We'll certainly be booking him again.

Stephen Grant really made our Hospital Star Award ceremony a success. He was as brilliant on stage as he was beforehand behind the scenes- paying attention to details like lighting, the timing of the presentations, and even making sure we included a toilet break halfway through the ceremony! So many of the guests have been talking about how much they enjoyed Stephen's performance. He is a very funny man.

This is the second time we've booked Stephen Grant for a corporate event, we loved him so much the first time we invited him back again - and we weren't disappointed! Splendidly funny ... Superb!

Just a quick email to say thanks to Stephen for putting in a great performance on Thursday. He was well received by the audience and our client really enjoyed his performance. Hope to be working with you both again soon.

I would just like to say a BIG thank you for helping to make yesterday's awards luncheon the best event yet. The initial feedback has been extremely positive. I look forward to seeing you perform on stage soon.

Just to say that Stephen Grant gave a great performance on Saturday night, so much energy! The audience loved him and feedback has been excellent. Just thought I'd pass it on!

How to book Stephen Grant for your event