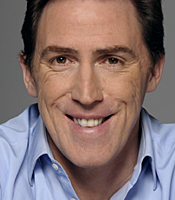 Rob Brydon was born in Swansea, South Wales on 3rd May 1965. He grew up in Baglan nr Port Talbot, before moving to Porthcawl where his interest in acting flourished under the guidance of Porthcawl Comprehensive School's drama teacher, Roger Burnel.

After school Rob began a three year course at The Welsh College of Music and Drama in Cardiff, but left midway through the second year to become a radio presenter for nearby BBC Wales.

There followed six years of presenting work on local television and radio, during which time Rob would perform the odd comedy pieces including, on Radio 5's 'Rave' with Alan Thompson, the early days of Keith Barret. Whilst at the BBC Rob joined the Bath based improvisational comedy group 'More Fool Us', where he met Julia Davis with whom he would go on some years later to make the award winning 'Human Remains'.

Leaving Cardiff for London, Rob Brydon worked mostly as a voice artist on animations and commercials until his role as the traffic warden in 'Lock, Stock and Two Smoking Barrels' prompted him to make a short video of comic characters he had created. The video, 'Rob Brydon - An Extremely Unlucky Traffic Warden' finished with Cardiff cabbie Keith Barret chatting cheerily to a camera fixed to the dashboard.

Clients often ask about purchasing books for giveaways and delegate packs. Below you’ll find a selection of products by Rob Brydon. Click the images to view on Amazon's website. For bulk orders, please speak with your Booking Agent.

How to book Rob Brydon for your event