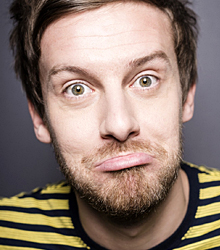 As seen on Russell Howard's Good News (BBC3) and Comedy Rocks (ITV1), Chris Ramsey has experienced a meteoric rise to the top of the comedy circuit since being a finalist in the Chortle Student Comedy Awards and the Leicester Mercury Comedian of the Year competition in 2009.

Chris made his Edinburgh Festival debut in 2009, appearing as part of the Comedy Zone at the Pleasance - the Fringe's longest-running and most prestigious stand-up showcase. He returned to the festival in 2010 with his sell-out hit solo stand up show, Chris Ramsey: Aggrophobic, and is currently working on a new stand-up show, to be debuted at the Edinburgh Festival this summer.

Chris Ramsey regularly comperes and performs at some of the biggest clubs in the UK including The Glee, Komedia, Up The Creek, The Frog & Bucket, and Last Laugh to name but a few. However Chris' live performances are not restricted to comedy clubs, as he has also supported some of the biggest names in comedy on tour, including; LEE MACK, RUSSELL HOWARD, RUSSELL KANE and, more recently, AL MURRAY THE PUB LANDLORD on a massive 40+ date UK tour in such prestigious venues as The Hammersmith Apollo.

As well as live performances and TV appearances Chris is fast becoming a familiar voice on the radio, with regular guest slots on Radio 1's Review show, an interview on Frank Skinner's Absolute Radio Show and as a mentor on BBC Radio's "Stand Up For Comic Relief".

Chris Ramsey has provided studio warm-up for Lee Nelson's Well Good Show (BBC Three), John Bishop's Britain (BBC One) and The Graham Norton Show (BBC One) and has recorded a pilot for E4 with Chris Addison.

Chris Ramsay was fabulous - I gave myself a headache and sore throat laughing so much and, working within the media industry it was as though he had written much of his material with me in mind!

Thank you for all your help for last Friday's show... [it] went down brilliantly and Chris Ramsay was an excellent compere. We have had some amazing feedback from the audience... Please do pass on my thanks to Chris and I hope that we can work again at some point in the future.

Chris Ramsay did extremely well at our event - it must be extremely difficult just to walk into an event with very little background to go on - especially a room full of lawyers! I was impressed that he had taken the time to find out a little about MASS and I thought he was excellent. He was funny and entertaining without being too rude or offensive. Please thank Chris and I wish him every success!

Chris Ramsay was fantastic!!! He went down a storm… he was amazing!!! Thank you!!

Just wanted to say that Chris Ramsay was absolutely fantastic last night. His set was spot on and he did a brilliant job hosting the awards part with Honest John. I couldn't have asked for better – he was worth every penny. Thoroughly nice chap as well. I did say a big thank you to him, but wanted to let you know how delighted I was as well.

Clients often ask about purchasing books for giveaways and delegate packs. Below you’ll find a selection of products by Chris Ramsey. Click the images to view on Amazon's website. For bulk orders, please speak with your Booking Agent.

How to book Chris Ramsey for your event

Stand-up comedian, presenter and the voice of Love Island

Comedian and actor (Live At The Apollo, Phoenix Nights, 8 Out of 10 Cats)

Stand-up comedian, presenter and the voice of Love Island

Comedian and actor (Live At The Apollo, Phoenix Nights, 8 Out of 10 Cats)