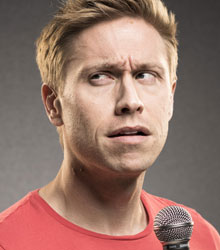 One of the UK's most successful live stand-up comedians, with over 3.4 million Facebook fans and 1.3 million Twitter followers, Russell Howard won "Best Compere" at the 2006 Chortle Awards and was nominated for an if.comedy award for his 2006 Edinburgh Festival Fringe show, Wandering.

Russell’s 2017 tour, Round the World, was his biggest tour to-date with performances spanning 11 countries across 3 continents. With 10 consecutive nights at the Royal Albert Hall, his tour breaks the venue’s record previously held by Frank Sinatra and Barry Manilow with 8 shows in a row. The success of this tour led to its release as a Netflix Special entitled Recalibrate.

Over the period from 2009 to 2015, Russell wrote and starred in 96 episodes of Russell Howard’s Good News, BBC Three’s best-performing entertainment show. Its success led to a new home on BBC Two for its ninth and tenth seasons, where it averaged over 3 million viewers per episode.

Multiple segments of the show have gone viral, amassing over 32 million views.

Russell's tireless energy, unabashed love of humanity and uniquely positive approach to stand up has made him one of the UK's favourite and most successful comedians.

I would like to say thank you to Russell Howard, for a brilliant show… it was non stop laughing from the moment he got on stage until he had finished. An amazing night – well done.

This guy is so funny. He has a really nice way of telling his jokes that has you gripped and then falling about laughing.

Clients often ask about purchasing books for giveaways and delegate packs. Below you’ll find a selection of products by Russell Howard. Click the images to view on Amazon's website. For bulk orders, please speak with your Booking Agent.

How to book Russell Howard for your event