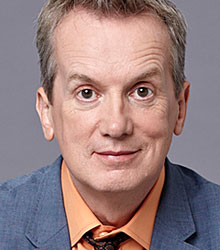 Frank Skinner is one of the UK’s top comedians and currently hosts Absolute Radio's Sony Award winning Saturday morning flagship show, whose podcasts have been downloaded over 10 million times.

His stand up career began in 1987, when he spent £400 of his last £435 booking a small performance space at the Edinburgh Festival Fringe. Four years later, in 1991, he returned to the city and took home comedy’s most prestigious prize, The Perrier Award (beating Jack Dee and Eddie Izzard).

Frank created The Frank Skinner Show for ITV, which is widely credited as setting the tone for the modern comedic chat show and ran from 1995 to 2005. Together with David Baddiel, he created and presented both Fantasy Football and Baddiel & Skinner Unplanned, and, alongside The Lightning Seeds, the pair also wrote the seminal football anthem Three Lions.

More recently, Frank created and hosted three series of Frank Skinner’s Opinionated for BBC2, hosted seven series of BBC1’s Room 101 from 2012-2018 and seven series of Portrait/Landscape Artist of the Year for Sky Arts.

He has presented documentaries covering passions including Muhammad Ali (BBC1), Elvis (BBC4) and investigating the life of George Formby (BBC4). His Absolute Radio show has won three gold awards for Best Speech Programme (2011 and 2014) and Best Entertainment/Comedy Production (2017) at the ARIAs and saw him inducted into the Radio Academy Hall of Fame in 2015.

As an author, Frank has published Dispatches from the Sofa; a collection of columns he wrote for The Times and has written two autobiographies, the first of which, Frank Skinner, was the top selling autobiography of 2002, spending 46 weeks in The Sunday Times Bestseller List. His latest stand-up show, Showbiz, has enjoyed a sold out national tour and subsequent sold out residency at the West End’s Garrick Theatre.

You could put Skinner down in front of any audience at any time and he would have them in stitches.

Frank Skinner prowls the NIA stage with as much spunk as any of the rock gods that play here... Skinner marshals his material brilliantly, interacting with the crowd or launching into set pieces as if it were all part of the same spontaneous thought process. He's one of the few comics who can play a room this big because, like Billy Connolly or Victoria Wood, his language is so evocative: “like a lizard's inner thigh”, he says of his laugh lines. One man and a mike becomes a vivid visual experience.

Clients often ask about purchasing books for giveaways and delegate packs. Below you’ll find a selection of products by Frank Skinner. Click the images to view on Amazon's website. For bulk orders, please speak with your Booking Agent.

How to book Frank Skinner for your event