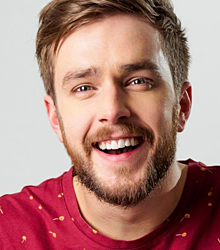 Following his success on Love Island, he took on the role of host for ITV2's physical comedy entertainment show, CelebAbility, adding to an extensive list of television credits, including Russell Howard's Stand Up Central and Drunk History (both Comedy Central) plus an array of panel shows, such as Virtually Famous (E4), Fake Reaction and Safe Word (both ITV2).

A regular voice on the radio too, Iain has made appearances on programs including The Now Show and Dilemma (both BBC Radio 4), Afternoon Edition and Fighting Talk (both BBC Radio 5 Live), Cel Spellman (BBC Radio One) and recorded a Radio One takeover.

In May 2018, Iain announced the release of his first book Not Ready to Adult Yet which was published through Harper Collins on the 23rd August, along with a companion podcast of the same name.

Not Ready to Adult Yet is packed full of hilarious life lessons from the voice of a generation and is Iain’s ill-informed guide to what life is really like for millennials, and how they can navigate it better.

An experienced corporate awards host and after-dinner comedian, Iain Stirling brings his inimitable style and wit to any event he does.

We absolutely LOVED having Iain...and have been giggling to ourselves ever since! Iain was fab… please pass on our warmest thanks to him.

The event was a huge success and Iain was great - so easy to get on with and hugely popular with the crowd. Hope to work with you again very soon!

I wanted to text to thank you and Iain. Friday was a huge success, I have received fabulous feedback about the whole show.

Clients often ask about purchasing books for giveaways and delegate packs. Below you’ll find a selection of products by Iain Stirling. Click the images to view on Amazon's website. For bulk orders, please speak with your Booking Agent.

How to book Iain Stirling for your event