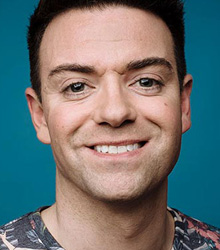 Des Clarke is one of the UK's most exciting performers. He has made a name for himself as both a highly successful comedian and one of television and radio's hottest presenters.

Clarke spent three years as a DJ on Scottish radio station Beat 106, fronting the Breakfast Show and winning the Presenter of the Year at the British Radio Awards in 2004. He later returned to Beat 106 under its new name of Xfm Scotland. In November 2008, Xfm Scotland became Galaxy Scotland and Clarke began hosting a weekday breakfast show with Vanessa Motion called 'Des & Vanessa @ Breakfast'.

Des Clarke has extensive TV experience, beating thousands of hopefuls to be asked to host ITV1's Saturday morning programme SM:TV Live from March to December 2003, following the departure of Ant & Dec. He has presented BBC's Children In Need show for several years and at the MTV Music Awards and at 'T In The Park' has interviewed stars such as Beyonce, Robbie Williams, Britney Spears, Justin Timberlake, Kylie and Christina Aguilera.

Des has also been involved in sports broadcasting, appearing regularly on BBC One Scotland's flagship football programmes, Offside and Sportscene as well as Sportsround on CBBC Channel.

Stand up comedy remains Des' first love and he performs his own solo shows annually at the Edinburgh Fringe and Glasgow Comedy Festival. He has toured the world with his unique brand of observational humour, appearing on stage in New York, Dubai, Australia and Los Angeles. Des has also received critical acclaim for his comedy, winning Chortle Best Newcomer and the ITV Golden Mic Award.

A high profile newspaper columnist and after dinner speaker too, Des Clarke has rapidly established himself as an exceptional all round performer.

Des Clarke maintained a sharp sense of humour while hosting the awards, adding asides at every opportunity.

How to book Des Clarke for your event