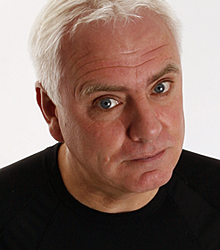 Multi award-winning Dave Spikey is one of the most sought-after comedy talents in the UK. With a career spanning three decades, he has numerous TV appearances to his name as a stand-up comedian, presenter and actor - and behind the screens, as an acclaimed comedy writer.

Dave's journey into show business began in 1990. After winning the 'North West Comedian of the Year' Award, he became a regular on the club circuit and once famously supported Jack Dee, Max Boyce, Cannon & Ball and Eddie Izzard all in the space of one week - all whilst continuing to hold down his day job as Chief Biomedical Scientist in Haematology at the Royal Bolton Hospital.

In 1996, TV comedy history was made when Dave met Peter Kay. Sharing a similar approach to comedy and writing, they went on to form a formidable partnership; collaborating on numerous TV shows including Channel 4's hit series 'That Peter Kay Thing'.

Inspired by this success Dave finally took the plunge and gave up the day job. Within twelve months he'd fulfilled his dream of writing a comedy series by co-writing and co-starring in Ch 4's critically acclaimed Phoenix Nights alongside writing partners Peter Kay and Neil Fitzmaurice. Together they wrote and starred in two series of the cult TV show with Dave playing 'the compere without compare', Jerry St Clair.

Following this phenomenal success, Dave's profile rocketed and in 2003 he embarked on his debut national tour, garnering rave reviews and performing to sell-out audiences, Dave quickly established his reputation as a first class live performer. Truly cementing his place as one of Britain's most cherished comedy talents, in 2004 he appeared as a guest on the legendary Parkinson, alongside megastar Sir Paul McCartney. He also performed before Her Majesty at The Royal Variety Performance in a star-studded line-up; allowing him to fulfil two lifelong ambitions within one momentous week!

Throughout 2005-06 Dave was a regular on TV starring as team captain alongside Jimmy Carr and Sean Lock on Channel 4's comedy quiz show 8 Out of 10 Cats. However, having enjoyed four series at the helm, Dave took the decision to move on and allow him to focus on other projects.

A prolific writer, Dave is continually busy developing several original ideas for television, in addition to touring his stand-up show around the UK.

As a recognisable TV face, and an esteemed live performer, Dave Spikey remains highly sought after in the world of corporate entertainment.

With over 25 years experience in the NHS, he is particularly suited to events within the medical field but with the rare gift of being universal and appealing to all types of audiences, he's the ideal choice for any corporate event; whether that’s after dinner comedy performances or hosting black-tie award nights.

Clients often ask about purchasing books for giveaways and delegate packs. Below you’ll find a selection of products by Dave Spikey. Click the images to view on Amazon's website. For bulk orders, please speak with your Booking Agent.

How to book Dave Spikey for your event