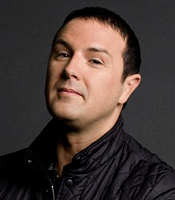 In 2000 Paddy McGuinness got the part as Paddy the doorman in That Peter Kay Thing. He appeared in the episode entitled "The Club" which led to the massive spin off series Phoenix Nights and Phoenix Nights Series 2.

Paddy then went on to co-write with Peter Kay, the eagerly anticipated spin off to Phoenix Nights: Max and Paddy: The Road To Nowhere. This followed the adventures of the two Phoenix doormen (Max and Paddy) and what they got up to on their travels around the country.

Max and Paddy's Power of Two, which featured the 2 characters performing in their very own work out video was subsequently released on DVD and became the fastest selling fitness video ever! On top of this, Paddy and other Phoenix Nights cast members toured the country with their hilarious live comedy show, The Jumping On The Bandwagon Tour.

This led Paddy to embark on his first ever solo stand-up tour, The Dark Side. Paddy performed 108 dates, entertaining audiences across the UK with his sell out show in 2005. The DVD Paddy McGuinness: Live was subsequently released and was the best selling comedy stand-up DVD at the time.

Paddy has filmed shows for the BBC, ITV, Channel 4, Sky 1 and Channel 5, including game shows and chat shows. In 2006 he wrote his first solo comedy short The Unknown Stuntman which he also starred in and was also a popular guest presenter on the Paul O'Grady Show.

In 2007, Paddy presented Raiders of the Lost Archive on ITV1, a show in which he and his guests (including Bruce Forsyth, Chris Tarrant and Michael Parkinson) watched TV shows they had appeared in years ago, which they had previously thought lost. Paddy was the face and writer of the Greggs' TV commercials for two years.

In 2008, Paddy appeared in the new Leigh Francis comedy for ITV Keith Lemon's Gap Year as well as numerous comedy shows including Eight Out of Ten Cats, Law of the Playground, Would I Lie To You, The Paul O'Grady Show, Alan Carr's Celebrity Ding Dong, Lily Allen and Friends and Gordon Ramsay's F Word as a celebrity chef.

Paddy went back on the road in 2008 for another hugely successful sell out tour Paddy McGuinness Plus You! Live, playing to audiences throughout the UK.

Paddy has filmed two series of Rory and Paddy's Great British Adventure with Rory McGrath for Channel 5, which saw them travel the length and breadth of the UK in a small camper van, taking part in a whole host of unusual but quintessentially British events.

Paddy began 2010 hosting the hugely popular ITV1 Saturday night prime time dating show Take Me Out which he has now fronted for over a decade.

He has also taken part in Robbie Williams' team in the star studded charity football game Socceraid at Old Trafford, alongside stars such as Mike Myers and Zinedine Zidane, hosted the Britain's Got Talent tour and co-hosted ITV1's This Morning over the summer.

Clients often ask about purchasing books for giveaways and delegate packs. Below you’ll find a selection of products by Paddy McGuinness. Click the images to view on Amazon's website. For bulk orders, please speak with your Booking Agent.

How to book Paddy McGuinness for your event