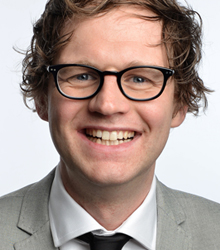 Mark Dolan is a comedian, television presenter and writer. He is best known for his Channel 4 documentary series, “The World's... and Me”, which featured the world's smallest, tallest and hairiest people, as well as the fattest pet! The show was a critical and ratings success, and the third series was transmitted in 2012.

Mark also hosted all three series of the raucous Channel 4 hit comedy show Balls of Steel, which broadcast from 2005 to 2008. He also hosted a spooky series for Channel Five in 2007, Urban Legends.

Mark Dolan currently indulges his passion for film, as the writer and presenter of Sky's flagship movie show 35mm, in which he reviews the latest cinema releases and interviews the stars behind and in front of the camera. He has hosted 35mm since 2008. He is also a guest contributor on LBC's Breakfast Show.

Mark's debut book, The World's Most Extraordinary People ...and Me, was published in July 2010 by Harper Collins, and is inspired by his hit Channel 4 series. Among the people Dolan writes about are a seven-year-old who can bench press double his bodyweight, and the person who holds the record for the biggest enhanced breasts.

Mark Dolan is one of the UK comedy circuit's most in demand MCs, with a Saturday night residency at Soho's leading comedy venue, the Amused Moose and a successful run of his Edinburgh Festival one man show, I'm Here to Help! in 2007, in which he helped solve the audience's problems. As a live MC, Mark delights audiences with a mix of topical humour, warm audience interaction and an unrivalled, polished delivery.

As a broadcaster, Mark Dolan launched both E4 and More 4 respectively as host of both the comedy show Show Me The Funny on E4, and The Last Word, the topical late night talk show, on More 4. His breakthrough came as star of The Richard Taylor Interviews, the hidden camera job interview show for C4.

As with his TV duties, Mark Dolan is a highly versatile live presenter and compere, having hosted the launch party of the Edinburgh Festival in front of an audience of 2000, presiding over the glittering Filmon.com launch in Central London, and exclusively hosting the Dark Knight Premiere at the Odeon Leicester Square for Warner Bros.

Mark has also hosted the 1st Annual Freelancer of the Year Awards, the Financial Times PIPA Awards, and the 4th Annual Conch Awards (sponsored by Pinewood Studios). In addition, Mark has chaired the Sky Movies Debate: Which is The Best Batman Movie?, acted as host and question master at Sky Media's Pub Movie Quiz, and hosted the World Photography Awards in Cannes.

Mark Dolan is a charming, quirky, intelligent and highly witty host, bringing a wealth of experience and professionalism to any event.

Mark Dolan was a dream to work with, absolutely fantastic from start to finish. From the minute he arrived to the very end Mark fully embraced the event with his charm and professional wisdom. On stage Mark captured the theme perfectly with a seamless and effortless comic flow throughout which extended off stage with his constant personal interaction embracing the entire occasion including all the guests, staff and crew.

Mark Dolan did a fantastic job - he was a great host and remained in control of the debate throughout, managing each speaker's allotted time and engaging with the audience when the debate was opened to the floor. He had obviously spent time preparing for the debate and this, coupled with his extensive film knowledge, made him the perfect host for this event. The crowd response to him was really great too - everyone we spoke to in the audience loved him and found him very funny!

Just wanted to pass on our thanks to Mark Dolan for Thursday, he was absolutely brilliant we couldn't have asked for any better, just what we wanted. It was a great evening, big success, so thank you both for helping us bring it together.

Freelancer of The Year Awards.

The awards event went very well and Mark was a great host. We enjoyed his comedy set and hosting, and it was great that he joined us for the meal; it felt like he really took part. Such a very nice person.

Clients often ask about purchasing books for giveaways and delegate packs. Below you’ll find a selection of products by Mark Dolan. Click the images to view on Amazon's website. For bulk orders, please speak with your Booking Agent.

How to book Mark Dolan for your event