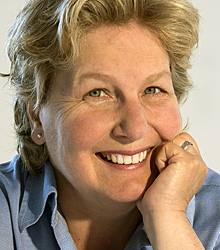 Her television career has included presenting the children's series No. 73, Saturday Starship, Get Fresh, Motormouth and Gilbert's Fridge, and on factual programmes such as Island Race. She has appeared as a panellist in shows such as Call My Bluff, Whose Line Is It Anyway?, Mock the Week and Have I Got News For You. She appeared in the very first episode of Have I Got News For You in 1990.

She is a current voice on BBC Radio 4, as the chair of The News Quiz. Until 2007 she was also the main presenter of the flagship travel programme Excess Baggage. She is also a frequent guest on shows such as I'm Sorry I Haven't A Clue and the comedy Giles Wemmbley Hogg Goes Off.

She has written several fiction and non-fiction books for children and adults, starting in 1994 with Tales from the Norse's mouth, a fiction tale for children. In 1995, she sailed around the coast of Britain with John McCarthy. In 2003, she published her travel biography, Gladys Reunited: A Personal American Journey, about her travels in the USA retracing her childhood. She writes regular columns for Good Housekeeping and the Sunday Telegraph.

In 2007 she was named Channel 4 Political Humourist of the Year and Radio Broadcaster of the Year by the Broadcast Press Guild.

Clients often ask about purchasing books for giveaways and delegate packs. Below you’ll find a selection of products by Sandi Toksvig. Click the images to view on Amazon's website. For bulk orders, please speak with your Booking Agent.

How to book Sandi Toksvig for your event