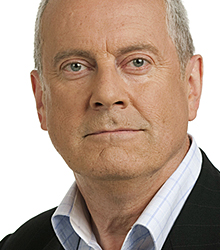 Gyles Brandreth is one of Britain's most sought-after public speakers. Author, broadcaster, former Oxford Scholar and President of the Oxford Union, one-time MP for the City of Chester and a Lord Commissioner of the Treasury, he once featured in the Guinness Book of Records for making the longest-ever after-dinner speech - lasting twelve and a half hours!

Well-known for his appearances on TV-am and in countless game shows in the 1970s and 1980s, Gyles Brandreth now appears on Channel Four's wordgame Countdown, Just a Minute on BBC TV and as a presenter for CBS News in the United States. He has his own radio show every Sunday on LBC 1152.

The former Member of Parliament for the City of Chester, a Government Whip and Lord Commissioner of The Treasury, Gyles Brandreth's private member's bills included the 1994 Marriage Act - allowing civil marriage ceremonies to take place in venues other than registry offices. His political diaries, Breaking the Code, are published by Weidenfeld & Nicolson.

Gyles Brandreth's many other books include The Complete Public Speaker, an autobiography called Under the Jumper, and, more recently, Who Is Nick Saint?, described by The Times as 'a first novel of wit, style and confidence... Not merely, like all the best after-dinner speakers, does he know how to spin a yarn; unlike most politicians, he has a touching access to the secrets of the human heart'.

As an award-winning after-dinner speaker Gyles Brandreth has performed in venues as varied as the Waldorf-Astoria, the Albert Hall, Buckingham Palace and Strangeways Prison.

As well as providing individual tailored after-dinner speeches, Gyles has a number of set-piece after dinner talks to offer including 'Language is Power' (he is a member of Trevor McDonald's Better English Campaign) and 'The Secret Life of Westminster'.

BREAKING THE CODE: How Government REALLY works
Gyles Brandreth has been a Government Whip, a Lord Commissioner of the Treasury and speech-writer to three prime ministers. According to Lord Danny Finkelstein, “Breaking the Code is how politics genuinely is - messy, tragi-comic (more often comic than tragic), stumbling about trying to do one’s best.”  In this keynote address, Gyles Brandreth cracks the code and reveals how Westminster and Whitehall really think and work.

THE 7 SECRETS OF HAPPINESS
With psychiatrist Dr Anthony Clare, Gyles Brandreth has identified the 7 secrets of happiness – and they work, which may explain why Brandreth’s book on the subject has been a Number One best-seller and is sold around the world, from the US to Russia. In his keynote speech on the subject, Gyles Brandreth shows how the 7 secrets can transform the way you work and the way your business performs.

"Gyles Brandreth has access o the secrets of the human heart." The Times

THE 6 ESSENTIALS OF SUCCESS
In search of the essential ingredients of success in public life,  Gyles Brandreth has interviewed everyone from Richard Branson to Sheikh Mohammed of Dubai and what he has learnt along the way – from princes, presidents and prime ministers, from major movie stars and spiritual leaders such as Archbishop Desmond Tutu, from military leaders and Usain Bolt – is at the heart of the keynote address in which he outlines the six essential ingredients of total success.

Terrific - the first standing ovation for a speaker we've ever had.

A conference is all too often deemed exceptional not because of the content but because one address is so compelling, so vivid, so lively and so entertaining that it sticks in the memory for all time. Gyles Brandreth's speech was of that order... A master-class in public speaking.

Brilliant. A standing ovation that was richly deserved.

Gyles Brandreth's speech couldn't have been more perfect and apt if we had written it for him. The fact that he was on just before the Minister worked brilliantly and he said things that no-one else could have got away with.

This is the third occasion we have used Gyles Brandreth and we were again absolutely delighted... the speech was sensational and brought the house down.

Gyles Brandreth was an exceptional host for our awards evening. He ensured the event flowed well with a great level of both fun and energy. His humour was pitched exactly right for our audience and his use of industry references impressed attendees and showed in depth research and preparation. The feedback we have received has been overwhelmingly positive - the best we have had for several years. Artist testimonial rating: Excellent.

The best speaker we have had in 27 years.

I am delighted to say that Gyles Brandreth was absolutely brilliant. I can report with confidence that he was our best celebrity speaker yet! He made the day and had everyone in attendance in fits of laughter. He has a great command of the political scene and reduced it almost to a well organised farce. We would recommend him to anyone who wants a first class speaker.

Clients often ask about purchasing books for giveaways and delegate packs. Below you’ll find a selection of products by Gyles Brandreth. Click the images to view on Amazon's website. For bulk orders, please speak with your Booking Agent.

How to book Gyles Brandreth for your event