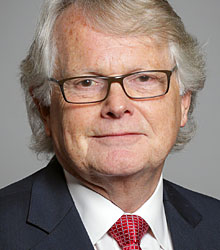 Before House of Cards became the most talked about show not on television, exclusively released on Netflix, Michael Dobbs wrote the original novel of the same name which was adapted into a British series later being honored as one of the “100 Greatest British Television Programmes” by the British Film Institute.

Prior to his hugely successful writing career, Michael Dobbs served in British politics where he worked as Margaret Thatcher's advisor (1977 to 1979), a Conservative Party speechwriter (1979 to 1981), the Conservative Party's Chief of Staff (1986 to 1987) and later, Deputy Chairman of the Conservative Party. Considered a masterful political operator, he was dubbed “Westminster's baby-faced hit man”, by The Guardian in 1987. Somewhere along the way he also managed to pick up a doctorate in nuclear defence studies in 1975 with an M.A., M.A.L.D., and Ph.D. His doctoral thesis was published as SALT on the Dragon's Tail. In 2007, Michael gave the Alumni Salutation at Fletcher School of Law and Diplomacy, Tufts University in Medford, Massachusetts, from where he graduated.

Michael describes himself as never having had “a proper job”, and perhaps in part that's because he's spent so much of his life hanging around all the wrong places at interesting times. He was with Margaret Thatcher when she took her first steps into Downing Street as Prime Minister, and was there again with John Major when he was kicked out. In between, he got bombed at Brighton during the 1984 IRA attack, banished from Chequers (after a row with Maggie), and in the quieter moments wrote the aforementioned best-selling book House of Cards, which later became a major television series.

In his restless search for a proper job, Michael Dobbs also worked in the private business sector. Initially taking a post as the Deputy Advertising Chairman for the global advertising agency, Saatchi & Saatchi, Michael moved up the ranks to Deputy Chairman in his near decade-long employment at the company, working directly under Maurice Saatchi.

Michael also has many years of experience in the United States, having moved there after graduating from Oxford in 1971. With a doctorate from Harvard and Tufts universities, he also worked on the Boston Globe throughout the Watergate scandal. The original British House of Cards is one of PBS's all-time most requested TV series and his Churchill novels have all been best-sellers. He also shared a girlfriend with Bill Clinton when they were both students at Oxford. ‘For some reason she never introduced us,' he says. ‘It took me many years and an entire presidential scandal to discover why.'

Yet, despite the above, it is as an author that Michael Dobbs has gained most plaudits. In December 2010 he was made a life peer and now serves as a member of the House of Lords, as Baron Dobbs of Wylye in the County of Wiltshire. He has been a judge of the Whitbread Book of the Year Award and lectures at dozens of literary and fundraising events each year. Michael is also an executive producer of the American television series House of Cards.

An accomplished and highly sought-after speaker on both sides of the Atlantic, Michael Dobbs is the rarest of things, a raconteur and storyteller whose life has orbited around so many of the great events that have shaped our lives.

He has observed politics from within the corridors of power and has the ability to relate his experiences with humour and wit. He doesn’t work from a script, but from a lifetime of experiences. It is no surprise therefore, that Lord Michael Dobbs is one of the UK's most accomplished and entertaining after dinner speakers on the circuit, with a highly individual and unique style. He's seen it, and he'll share it; with highly popular talks about leadership, corruption and not forgetting the most famous global show not on television, House of Cards.

Michael Dobbs’ speech topics are wide-ranging. He can present lighthearted and anecdotal or heavy political content; senior level audiences love him and he is an excellent satirist. Recent speech titles include the following:

Michael is also able to provide an insightful, detailed and entertaining talk about the private life of Winston Churchill. He has undertaken many international speaking tours, his most recent in the USA being described as "a coast-to-coast triumph".

Clients often ask about purchasing books for giveaways and delegate packs. Below you’ll find a selection of products by Lord Michael Dobbs. Click the images to view on Amazon's website. For bulk orders, please speak with your Booking Agent.

How to book Lord Michael Dobbs for your event