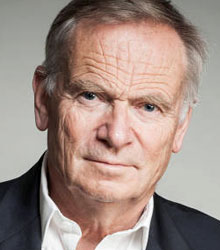 Best-selling author, former politician, part-time auctioneer, philanthropist and socialite, Jeffrey Archer, was born in London in 1940 and educated at Oxford University where he received a Diploma in Education. He has served five years in Britain’s House of Commons and three decades in the House of Lords.

However, becoming an author wasn’t always Jeffrey’s plan. In the mid 1970s he was facing bankruptcy following a bad investment decision and had to find a job to make ends meet. Opportunity came his way, and so he decided to try his hands at writing. Four decades later, he is one of the UK’s most celebrated and bestselling authors.

At Oxford, Jeffrey was successful in athletics, competing in sprinting and hurdling, and becoming president of the Oxford University Athletic Club. He gained a blue in athletics and once competed for Great Britain going on to run the 100 yards in 9.6 seconds in 1966.

He began a career in politics serving as a Conservative councillor on the Greater London Council between 1967–1970. Then, at 29 years old, he was elected Member of Parliament (MP) for the Lincolnshire Conservative constituency of Louth in 1969, a position he held until the 1974 general election when he stood down as an MP.

In parliament, Jeffrey Archer was on the left of the Conservative Party, rebelling against some of his party's policies. He advocated free TV licences for the elderly and was against museum entrance charges. He employed David Mellor to deal with his correspondence and tipped him to reach the Cabinet.

His political career was revived in the 1980s when he became a popular speaker among the Conservative grassroots. He was appointed deputy chairman of the Conservative Party by Margaret Thatcher in September 1985.

He was made a life peer in 1992, subsequently becoming Conservative candidate to be the first elected Mayor of London in 2000, with the support of two former Prime Ministers, Margaret Thatcher and John Major.

Jeffrey Archer has topped the bestseller lists around the world, with sales of over 275 million copies in 97 countries and more than 37 languages. In fact, he is the only author ever to have been a number one international bestseller for all his publications; in fiction (nineteen times), short stories (four times) and non-fiction (The Prison Diaries).

His first novel, Not a Penny More, Not a Penny Less, was published in 1975; since then he has written numerous others, including Kane and Abel (1979), First Among Equals (1984) and, more recently, Nothing Ventured in 2019.

Jeffrey is a savvy business investor in art and entertainment, owning half the West End musical Grease and paintings worth up to £100m, including works by Monet, Rodin, Renoir, Picasso and Warhol.

He is also an amateur auctioneer, conducting around 20 charity auctions a year, and has raised over £51m in the last 30 years for good causes.

Clients often ask about purchasing books for giveaways and delegate packs. Below you’ll find a selection of products by Lord Jeffrey Archer. Click the images to view on Amazon's website. For bulk orders, please speak with your Booking Agent.

How to book Lord Jeffrey Archer for your event