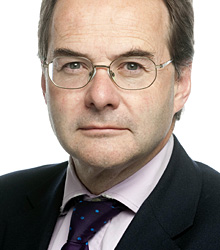 Quentin Letts is parliamentary sketch writer and theatre critic for the The Times and Sunday Times respectively, dishing up comment, character assassination and analysis of our ruling elite. He regularly appears on television programmes such as This Week, NewsNight, Have I Got News For You and Question Time.

From sticky-fingered politicians to self-indulgent arts gurus, bungling Cabinet ministers to busty pantomime dames, Letts describes his subjects with voluble glee. Likely both to amuse and provoke, he reports from the front stalls of Westminster, where he invented the nickname "Gorbals Mick" for Commons Speaker Michael Martin, and "Mr Squeaker" for Martin's successor John Bercow. Others jabbed by his quill are John Prescott, Lord Sugar, Jonathan Ross and even the poor, defenceless breakfast telly weather forecasters!

Author of "50 People Who Buggered Up Britain" and the recent "Letts Rip", he is tidier than Boris Johnson, shorter than Jeremy Clarkson and has definite views on the morals and mayhem of British public life. Letts was previously a gossip columnist for the Daily Telegraph and New York bureau chief for The Times.

In "Who's Who" he lists his pastimes as singing hymns and watching cricket.

Quentin Letts is a highly sought-after speaker, at both after dinner and keynote level, and an ideal panellist / conference chair for political and current affairs focussed debates.

Clients often ask about purchasing books for giveaways and delegate packs. Below you’ll find a selection of products by Quentin Letts. Click the images to view on Amazon's website. For bulk orders, please speak with your Booking Agent.

How to book Quentin Letts for your event