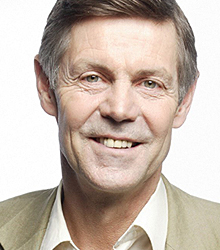 Matthew Parris is one of the UK's most highly respected journalists, and became best known as the Parliamentary sketch writer for The Times, a position he held for 14 years until 2002. He has been named Columnist of the Year at the British Press Awards on more than one occasion. He continues to write on politics with insight, authority and acerbic wit for The Times, Telegraph, and The Spectator.  Born in Johannesburg, Matthew was educated at Cambridge before going on to study International Relations at Yale. Returning to the UK, and after turning down a job at MI6, two years at the Foreign Office were followed by a spell at the Conservative Research Department. He then served as a member of staff in Margaret Thatcher's office until the 1979 General Election, when he was elected MP for West Derbyshire. Matthew gave up his seat in 1986 and went on to host LWT's political interview programme Weekend World, a political interview programme.
Since then Matthew's Times column has become required reading around Westminster combining a rebellious streak with thoughtful, informed opinion. Never afraid to be outspoken he tackles the hypocrisy, delusions and motives of the Parliamentary elite.

Matthew Parris is a frequent contributor to many other publications including The Spectator and has been named ‘Columnist of the Year' at the British Press Awards on numerous occasions. He is also a frequent television and radio broadcaster.

Aside from politics, Matthew's other great love is travel and over the years he has led expeditions to Mount Kilimanjaro, Peru and Bolivia as well as to Zaire and the Sahara. A keen runner, he has also competed several times in the London Marathon, achieving a personal best of 2 hours 32 minutes, a time still unbeaten by any other sitting or retired MP.

His first book, Inca-Kola recounts his travels in Peru. Matthew has published several compilations of his pieces in The Times and has also edited Scorn, a book of quotations about curses, jibes and general invective. Other literary credits include Great Parliamentary Scandals, Five Centuries of Calumny, Smear and Innuendo and Off Message: New Labour, New Sketches.

Matthew Parris is one of the UK’s most highly respected journalists and a charismatic and knowledgeable after dinner speaker and keynote speaker.

From academia to politics, to print, TV and radio journalism, his interests are far-reaching and his analytical thinking is motivational, entertaining and educational.

Matthew’s speaking style is often humorous, mainly light, but sometimes with a more serious undertone. For light-hearted after dinner speeches, he usually presents a précis talk about his life and career; from his early career days as Margaret Thatcher’s letter writer — where he personally had the task of opening and responding to an average of 500 letters per week — through his years as a politician serving in her Government, and then moving on to broadsheet journalism and the media.

Matthew Parris was very well prepared and was able to engage with the audience with industry specific comments when he started speaking.This ensured that the attendees listened and thereafter his fluent delievery of his main topics and themes held the audience very well.His pace ,annunciation and intonation were excellent as was his timing.

The Institute of Brewing & Distilling.

I have recently had three very pleasant experiences, for all of which you have been responsible. The first was listening to your speech, which was a tour de force. The second was standing in front of the microphone you had just vacated and taking the applause which you had so richly deserved. The third was opening a sheaf of letters over the past few days, all remarking on the excellence of your contribution.

Thank you very much indeed for the excellent after dinner speech at the FLA's Annual Dinner... you went down extremely well with everyone and the evening was a roaring success.

Clients often ask about purchasing books for giveaways and delegate packs. Below you’ll find a selection of products by Matthew Parris. Click the images to view on Amazon's website. For bulk orders, please speak with your Booking Agent.

How to book Matthew Parris for your event