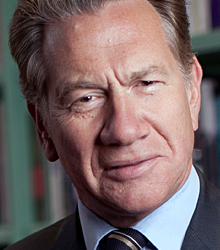 Famous for his trademark garishly bright attire, the Rt. Hon. Michael Portillo enjoyed a high-profile political career which was established very quickly following his election to Parliament in 1984 and spanned two decades. Since leaving politics, he has pursued a successful career in broadcasting, presenting and participating in a wide range of television and radio programmes.

First elected to the House of Commons in a 1984 by-election, he served as a junior minister under both Margaret Thatcher and John Major. Joining the Conservative government in 1986, Michael’s first Ministerial post came in 1988 when he was appointed Minister of State for Transport. He was Minister of State for Local Government and Inner Cities from 1990 to 1992.

Following the Conservative victory at the 1992 General Election, he was admitted to the Privy Council and appointed a Cabinet Minister — staying within the Cabinet for the entire duration of the second Major Government.

He then left Parliament in May 1997 and successfully cultivated a broadcasting career, before returning to the House of Commons in 1999 after a two-year hiatus as the MP for Kensington & Chelsea, when he was re-elected to Parliament in another by-election.

In February 2000, he was appointed Shadow Chancellor of the Exchequer by Conservative leader William Hague. He unsuccessfully contested the leadership of the Conservative Party in the summer of 2001, finishing third place behind Iain Duncan Smith and Kenneth Clarke, before stepping down from front bench politics in 2005, and making himself available for engagements on the corporate speaking circuit.

Between its inception in 2003 and cancellation in 2019, he appeared in the BBC weekly political discussion programme This Week with Andrew Neil, and, until September 2010, Labour MP Diane Abbott. For six years he was also a weekly columnist on The Sunday Times and the theatre critic of The New Statesman between 2004 and 2006.

Michael Portillo's passion for steam trains led him to make the BBC documentary series Great British Railway Journeys, beginning in 2010, in which he travels the British railway networks, referring to various editions of Bradshaw's Guide. The success of the show led him to present series about railway systems in other countries.

He continues to be featured widely in the broadsheets and is a frequent commentator on current affairs and political issues on national television and radio.

A highly entertaining and engaging speaker, Michael Portillo delivers keynote conference presentations in addition to speaking at dinners and banquets as a more informal after dinner speaker.

He is also a professional and sought-after chairperson or host who is able to command attention and establish a good rapport with any audience. His particular areas of expertise include the Conservative Party, defence, economics, international affairs, and public finance.

On behalf of the Functions Committee, we would like to take this opportunity of thanking you for your very interesting, amusing and informative words at the Emunah Summer Lunch this week. Everyone present greatly appreciated your visiting every table enabling many people to speak with you personally and to have their photo taken with you. Thank you once again.

We were delighted to have Michel Portillo as our after dinner speaker at the BMA Research Grants Awards Ceremony 2013. He hit just the right note and the feedback from our guests has been universally excellent. Of course, it's not just about the jokes; it is about the delivery and the rapport with the audience. All these elements were in place last evening. Thank you.

I would appreciate it if you could pass on our sincere thanks to Michael Portillo. He was a very engaging speaker and entertained our audience fully for 30 minutes. In addition he dealt professionally with our Q&A and mingled with our guests.

Clients often ask about purchasing books for giveaways and delegate packs. Below you’ll find a selection of products by Rt Hon Michael Portillo. Click the images to view on Amazon's website. For bulk orders, please speak with your Booking Agent.

How to book Rt Hon Michael Portillo for your event