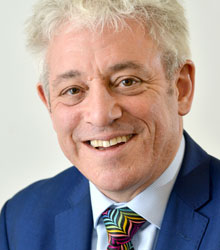 The Rt Hon John Bercow served as a Member of Parliament for 22 years, the last 10 of which were as Speaker of The House of Commons. When he retired on 31st October 2019, he had become one of the most recognisable and iconoclastic figures in British politics, and had created a vacancy of huge importance.

As Speaker since 2009, John had a ringside seat during one of the most febrile periods in modern British history, presiding over the Commons while it had to contend with key issues such as austerity in the light of the financial crisis; the coalition government between the Conservatives and Liberal Democrats; and of course the most intractable problem of all - how to deliver on the 2016 referendum decision that Britain should leave the EU.

He served as the 157th Speaker of the House of Commons and was the first since World War II to keep order in front of four Prime Ministers.

John Bercow became a Conservative councillor in the London Borough of Lambeth in 1986 (until 1990) and serving from 1987 to 1989 as deputy leader of the 21 strong Conservative Opposition Group. At the time John was the youngest deputy group leader in the country.

John entered Parliament in 1997 as Conservative MP for Buckingham. He was appointed Shadow Chief Treasury then Work and Pensions Secretary, but resigned to support the Labour Government’s policy to allow unmarried gay and heterosexual couples to adopt.

In September 2007, John was appointed by Ed Balls, Secretary of State for Children, Schools and Families, to lead a review of services for children and young people affected by speech, language and communication needs – which resulted in millions of additional funding.

John was appointed to the Speaker’s Conference on Parliamentary Representation in November 2008. The Conference was asked to ‘consider, and make recommendations for rectifying, the disparity between the representation of women, ethnic minorities and disabled people in the House of Commons and their representation in the UK population at large’.

John took over from Speaker Martin on 22nd June 2009 with a mission to “strengthen the backbenches and recognise that Parliament is more than a rubber-stamping operation for the government of the day”. He was re-elected three times over a 10 year period.

Resigning the position on October 31st 2019, in a stream of tributes on his departure, even critics admitted that he had delivered on the original promise.

Speaker Bercow built a reputation as a reformer. On one level he dispensed with knee breeches, silk stockings and buckled court shoes. More significantly he increased the use of 'Urgent Questions' requiring Ministers to make 685 statements on pressing issues, extended the time for PMQs, and replaced the shooting range with a nursery.

He introduced Barack Obama to address both Houses of Parliament, but opposed an invitation to Donald Trump on grounds of racism and sexism. He was also the first Speaker to allow the UK Youth Parliament to debate in the Commons chamber, and went on to chair the event for ten years.

John has received a string of awards from The Spectator's Backbencher to Watch to Stonewall's Politician of the Year. He lives in London.

Having stepped down from Westminster, as a keynote speaker John Bercow shares his insights on the future of British politics and the lessons he has learned about implementing change.

John is also a seasoned raconteur with countless stories from his time treading the corridors of power. His after dinner speech is a characteristically forthright and incisive account of his unique vantage point into British politics.

Containing his verdicts on many of the leading figures of the era, from Tony Blair to David Cameron, Theresa May, and Boris Johnson, John Bercow explores and explains the ways in which he sought to democratise the business of Parliament, using the Speakership to champion the rights of backbench MPs and hold the government to account.

John enjoys an abiding passion for football (Arsenal) and tennis. He was once Britain's No.1 junior player, but considered too short to turn professional.

Thank-you again for your contribution to the first ever CPA Virtual Congress 2020. We set out to do something very innovative, very transformative, and ultimately something hugely democratising, in the best interests of all our members. Thank you for accepting to speak and for delivering an exceptional content that is of great value to our members and all congress participants.

Clients often ask about purchasing books for giveaways and delegate packs. Below you’ll find a selection of products by Rt Hon John Bercow. Click the images to view on Amazon's website. For bulk orders, please speak with your Booking Agent.

How to book Rt Hon John Bercow for your event