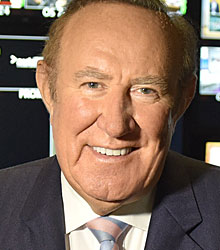 Andrew Neil was named Journalist of the Year 2013 by Britain’s prestigious Political Studies Association and one of the 500 most influential people in the UK by Debrett’s in 2015.

In 2015 The Times said “the ultimate test for assessing whether a party leader was fit to be Prime Minister is to put them in front of Andrew Neil for 40 minutes, the most forensic interviewer in broadcasting”.

In 2016, a poll of Members of Parliament voted Andrew the best overall political journalist in the country.

Since 1996 Andrew Neil has been an executive publisher at Press Holdings Media Group, fulfilling various roles including Chief Executive, Editor-in-Chief and, since 2008, Chairman. The group’s current brands include The Spectator magazine and the Telegraph Media Group, parent company of the Daily Telegraph and Sunday Telegraph. He is also Chairman of ITP Media Group, the largest magazine publisher in the Gulf (based in Dubai), a position he has held since 2006.

In addition to his business responsibilities, Andrew is a well-known television anchorman; former presenter of the live political debate programmes Politics Live and The Andrew Neil Show on BBC Two.

For 16 years, between January 2003 - July 2019, he presented the award-winning current affairs and politics television programme This Week on BBC1 every Thursday night, alongside former Conservative MP Michael Portillo and Labour politician, Diane Abbott.

The following year he left The Economist, to become Editor of The Sunday Times of London, one of the world’s most prestigious and influential newspapers and a position he held from 1983-1994. Over the next 11 years he turned it into the undisputed multi-section market leader, renowned for its investigative journalism and scoops.

While still editing The Sunday Times he also served as Executive Chairman of Sky Television, which he launched for Rupert Murdoch in 1989 as Britain’s first multi-channel satellite TV platform. He created Sky News and brought The Simpsons to British screens.

Before leaving The Sunday Times to become freelance, Andrew Neil moved to New York as Executive Editor of Fox News from June 1994 until early 1995. In early 1998 he also presided over the launch of a new upmarket Sunday paper "Sunday Business" which became a critical and circulation success and which was awarded "Sunday Newspaper of the Year Award".

As a business consultant he has been involved in European digital television developments and advising on the acquisition and development of a number of publications as well as the launch of a new business daily for Asia in 1996 called "Asia Times" and a new news magazine "Asia Inc".

Born in Paisley, Scotland, Andrew graduated from the University of Glasgow in 1971 with an MA (Hons) in Political Economy, Political Science and American History.

In October 1996 Macmillan published his autobiography “Full Disclosure”, on his Sunday Times and Sky TV years, which was serialised in Vanity Fair in America and the Daily Mail in Britain. Andrew holds several honorary degrees.

In 1999 he was elected Lord Rector of the University of St Andrews, one of the oldest and most distinguished universities in the world. On stepping down from that post he was made a Doctor of Laws by the university.

Whether it’s in his capacity as a keynote speaker or as a conference facilitator, Andrew Neil is a provocative, incisive and robust speaker from the world of heavyweight politics and media.

He has lectured on politics, economics, international relations, business and the digital revolution to some of the most important companies in the world, from Microsoft and Oracle to HSBC and Citibank.

However, if something more light-hearted is required, then Andrew is one of the UK’s finest most sought-after raconteurs and insightful after dinner speakers, able to speak candidly and knowledgeably on a broad variety of themes.

The BSIA booked Andrew Neil to give the keynote speech at the security industry’s premier awards ceremony for its 50th anniversary celebrations in central London. Andrew was much better than we could have anticipated with a fascinating insight into the current political landscape in the UK, Brexit, the election of President Trump and the broader geopolitical scene. He was both funny and sagacious in his speech which was extremely well received from our broad audience. We would certainly recommend Andrew Neil as a guest speaker to other organisations looking for someone with a sharp wit, intellect and gravitas.

How to book Andrew Neil for your event