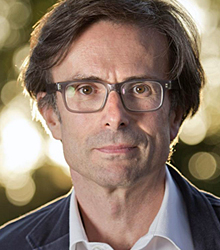 Robert Peston is ITV’s Political Editor, presenter of the politics show 'Peston', founder of the education charity, Speakers for Schools and vice president of Hospice UK. For a decade until the end of 2015, he was at the BBC, as Economics Editor and Business Editor.

At the BBC Robert played a prominent role in exposing the causes and consequences of the credit crunch, banking crisis and Great Recession; it was Robert who revealed that Northern Rock was close to technical insolvency and had approached the Bank of England for emergency support. This was the beginning of a chain of events in the banking sector which effected the entire world economy and in 2009 took the World into recession.

He has won more than 30 awards for his journalism, including Journalist of the Year and Scoop of the Year (twice) from the Royal Television Society.

He was previously City and Assistant Editor of The Sunday Telegraph, in charge of the business and money sections. Before that he was the Financial Times' Financial Editor and a member of the editorial board. He had also served as Political Editor, Banking Editor and founder of the investigations unit.

In 2008, Robert Peston wrote Who Runs Britain? How the Super-Rich are Changing our Lives. It explained the nature of the boom, and why we're now having to pay the price for excess; or as The Guardian described it, 'how Labour glorified the City and (allowed it to) put all the nation's economic eggs into one dangerous basket of fizzy finance. Robert has since presented Super Rich: The Greed Game for BBC2, on the causes and consequences of the Credit Crunch.

The previous year, he won the Royal Television Society's Scoop of the Year award (for his exclusive on Northern Rock seeking emergency financial help from the Bank of England) and also the Wincott Award for Business News/Current Affairs Programme of the Year. Robert Peston was Journalist of the Year in the Business Journalism of the Year Awards for 2007/8.

His biography of Gordon Brown was hailed as "a book of unusual political significance" by Sir Howard Davies, former Director of the London School of Economics.

In 2012, Robert Peston wrote what would become another best-seller, How Do We Fix This Mess? The Economic Price of Having It All and the Route to Lasting Prosperity. In which he explains the recent global economic mess and how to escape it - in his characteristically straightforward way.

As with his previous bestsellers, in his next literary undertaking, WTF? (2017), Robert draws on his years of experience as a political, economics and business journalist to show us what has gone bad and gives us a manifesto to put at least some of it right.

Clients often ask about purchasing books for giveaways and delegate packs. Below you’ll find a selection of products by Robert Peston. Click the images to view on Amazon's website. For bulk orders, please speak with your Booking Agent.

How to book Robert Peston for your event