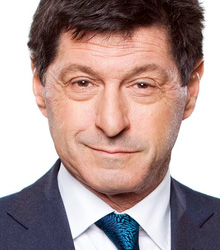 Jon Sopel currently hold the prestigious post of North America Editor, the most senior foreign posting in the BBC. Since moving to Washington, he's conducted an exclusive interview with President Obama, has travelled on Air Force One – and famously clashed with President Trump at a White House news conference. His book 'If Only They Didn't Speak English, Notes From Trump's America' was published in 2017.

Prior to his US posting, Jon presented a new programme for BBC World News (launched 2013), 'Global with Jon Sopel', and for many years he was also the main presenter of 'The Politics Show'; interviewing key politicians including Tony Blair, David Cameron, Jack Straw, Gordon Brown and Condoleezza Rice.

Jon Sopel has also been a senior presenter for the BBC News Channel and appeared on Radio 4’s PM, Breakfast News, BBC News at One, BBC News at Six and BBC News at 10. He has presented Newsnight, as well as fronting the annual coverage of the UK political party conferences and anchoring coverage on location from around the world on major political and international stories, including wars in Iraq, Afghanistan and the Middle East, and many natural disasters. Jon has also held the position of Chief Political Correspondent, and spent four years living in France as the BBC's Paris Correspondent.

Jon has written an acclaimed biography of Tony Blair, 'Tony Blair; The Moderniser'. He has received many awards for his work including being shortlisted for the National Presenter of the Year at the Royal Television Society Television Journalism Awards in 2011/12, and political Journalist of the year in 2007.

Clients often ask about purchasing books for giveaways and delegate packs. Below you’ll find a selection of products by Jon Sopel. Click the images to view on Amazon's website. For bulk orders, please speak with your Booking Agent.

How to book Jon Sopel for your event

Presenter of ITV News at Ten and The Agenda

Presenter of ITV News at Ten and The Agenda