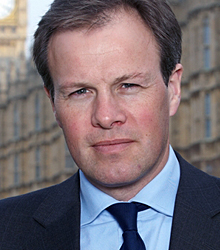 Tom Bradby is a presenter of ITV News at Ten and host of ITV's weekly current affairs programme The Agenda. Renowned for his expert analysis and inimitable interviewing style, Tom has led ITV News coverage of all recent General Elections and regularly conducts exclusive interviews with the most influential figures in Westminster and the political arena.

Tom began his reporting career with ITV as Ireland Correspondent more than fifteen years ago, during which time he covered the unfolding peace process and wrote his first novel, Shadow Dancer. As Asia Correspondent, based in Hong Kong, he was shot and seriously wounded whilst covering a riot in Jakarta.

After a spell as Royal Correspondent, he went on to become UK Editor before taking up his post as Political Editor in the summer of 2005 — a position he held for a decade before being made the main anchor of News at Ten in 2015.

Shadow Dancer was later made into a film starring Clive Owen, Gillian Anderson and Andrea Riseborough for which Tom wrote the screenplay. His script was nominated for Screenplay of the Year in the Evening Standard Film Awards.

Tom’s latest novel, Double Agent was published in May 2020.

As an after dinner speaker, Tom Bradby’s talks are amusing, insightful, passionate and never anodyne! He reflects humorously on a long, varied and sometimes painful career in journalism; from the chaos of Ireland, to the shock of being shot in Jakarta, to the craziness of dealing with the royal family.

He has numerous witty and entertaining anecdotes from time spent with various leading figures in today's society, whilst also sharing with the audience shrewd insights in to the workings of our political system.

Tom has a unique 'no holds barred' style on television and prides himself on telling it like it is. He brings these same qualities to his public speaking, with some fascinating insights into what really goes on behind the scenes and trenchant views on the modern political world all delivered with great charm and humour.

Clients often ask about purchasing books for giveaways and delegate packs. Below you’ll find a selection of products by Tom Bradby. Click the images to view on Amazon's website. For bulk orders, please speak with your Booking Agent.

How to book Tom Bradby for your event